Irish Residential Property Price Index (RPPI) is out today with latest figures for June 2013 offering a snapshot on H1 and Q2 activity in the sector, with some encouraging signs.

From the top line data: the overall property price index has managed to post the first annual increase in June since January 2008. However, overall trend in overall index remains flat, as established from Q2 2012.


Top-line conclusion: RPPI is struggling to lift up above the flat trend despite the unprecedented level of prices collapse to-date.

Chart to illustrate the above trends: 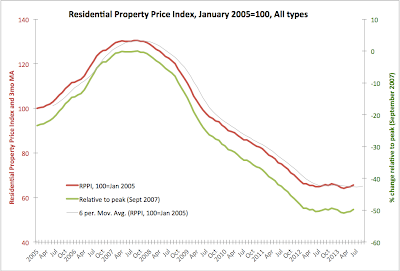 Apartments drove the overall index up on a m/m basis and largely accounted for much of change y/y. The problem is that apartments index is based on thin data, so it is subject to much volatility.
Chart below illustrates Apartments and Houses indices trends: 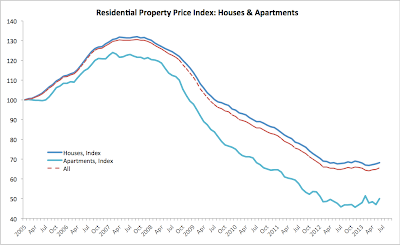 Top line conclusions: Again, the flat trend remains for the houses index and there is a slight upward trend for the apartments. Both series are relatively anaemic, despite the positive moves. High volatility in Apartments index suggests that caution should be used in interpreting overall RPPI data short-term moves. 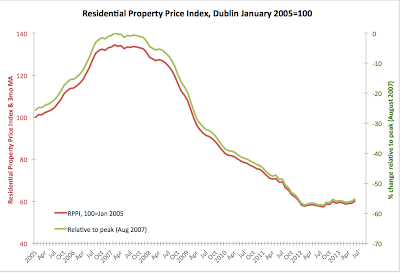 Top line conclusions:  Dublin RPPI is showing most significant and lasting gains of all sub-indices, backed also by medium-range volatility (STDEV for m/m changes is 1.38 for Dublin RPPI).

From RTE website:
"A lack of available supply is the main reason for the increase."

Meanwhile Banks moving at glacial speed to repossess defaulting buy-to-let customers; as the banks are owned by government, this is state market control of assets with borrowed money that will be paid off by our grandchildren.

There is no data on supply beyond Daft asking prices and listings. Thus, RTE cannot make such a claim without qualifying it.