Resting on one's laurels is a dodgy proposition. However, forgetting one's achievements is of an equally problematic virtue. To balance things up - a good reminder of Ireland's road travelled from the 1960s through 2008 and I have adjusted figures for Greece and Ireland for 2012 levels of GDP per capita based on IMF data. 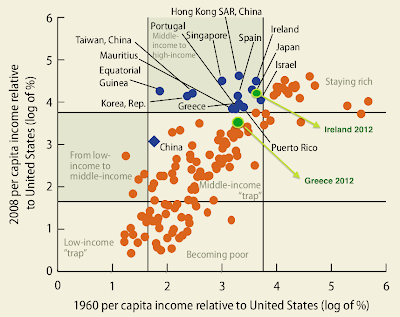 Interesting bit - Ireland remains in the 'rich' club as a country that managed an elusive move from middle income economy in the 1960s to high income economy in 2000s and 2010s. Greece dropped out of the same group.
Posted by TrueEconomics at 10:07 AM