IMF Report on Malta is out, with, as expected, much of attention given to the risks of erosion of the tax advantages that form one of the core drivers for Malta's growth. This, of course, is of interest to other European jurisdictions, including Ireland.

IMF opens the report with a statement that Malta (emphasis in italics is mine) "has maintained macroeconomic stability in the face of a major crisis in Europe. Low reliance on external finance by the government and domestic banks, solid fundamentals, and a sound banking system have contributed to this resilience. However, recent events in Europe have heightened financial stability risks. In the longer term, Malta’s attractiveness as a financial and business location could be adversely affected by regulatory and tax reforms at the European level. "

"The Maltese economy has greatly benefitted from a business-friendly tax regime… Although these gains are hard to quantify, the large increase experienced in financial services [parallels to our IFSC anyone?] and other niche activities [in Malta's case: online gambling. In Ireland's: all IP-linked tax arbitrage, e.g. Google et al] since 2004 are likely related to Malta’s accession to the EU [which means Ireland is hardly unique here], its macroeconomic stability [which Ireland spectacularly does not have], and relatively favorable tax regime [bingo!]. Over the last ten years, more than half of the growth in value added is explained by the growth in financial services, ancillary activities (legal, accounting, and consulting), remote gaming, and ICT [wait, wait… but Dublin?… replace remote gaming with pharma - worse]. These sectors alone account for a quarter of total value added and 12 percent of employment [err… even more in Ireland and growing, again - replace remote gaming with gaming and… worse in the case of Ireland]. It is possible that greater fiscal integration of EU member states and a potential harmonization of tax rates could erode some of these benefits, with consequences on employment, output and fiscal revenues." 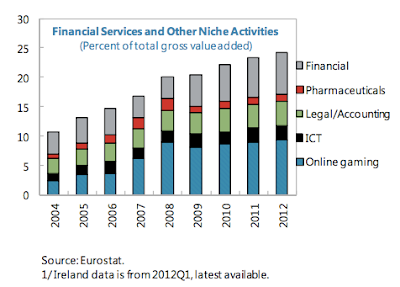 The risk is medium in size, medium/low in probability of materialisation and medium term - per IMF:

And thus, the report states that "The authorities were also of the view that an EU-wide tax harmonization would not happen in the short or medium term." However, let me ask you a simple question - how often does the IMF directly and bluntly pointing actual risks to the euro area states? After they have fully materialised, only. Hence, IMF stating the politically-sensitive and structurally important risk is 'medium/low' in likelihood and 'medium' in expected impact is as stern of a warning as one might expect. At any rate, of 6 main risks faced by the Maltese economy, the risk of tax regime changes is ranked joint 3rd with the risk of Protracted period of slower European growth, Significant declines in real estate prices, and ahead of the risk of Global oil shock triggered by geopolitical events.


Why such downplaying of the risks?

"Malta has been an important international banking centre in the past 25 years. A special offshore regime for banks (and other non-bank institutions) was promoted since the late
1980s. Like in several other European jurisdictions (Cyprus, Ireland, Luxembourg, or Switzerland), the main incentives offered to foreign investors at that time included exemptions from various regulations imposed on onshore banks and a favorable fiscal treatment." 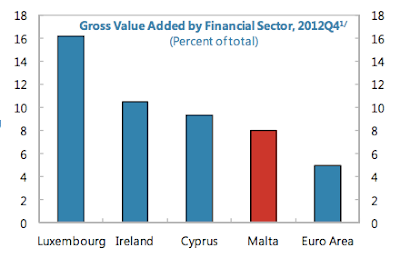 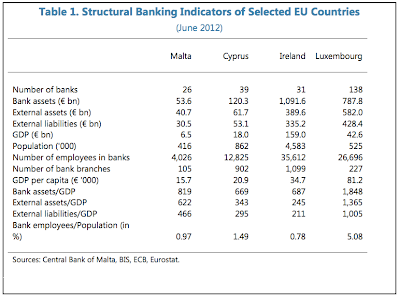 "The separate offshore supervisory framework was eliminated in 2002. As part of the planned accession into the EU, Malta was required to amend its financial policies to treat local businesses the same as international companies. In the mid-1990s, Malta started abolishing its offshore banking. In 2002, the legal amendments to the Banking Law removed an offshore banking option. Since then, all banks operate under the same regulatory and fiscal frameworks."

Spotting a picture of Dublin's IFSC, yet?..

"However, Malta maintained a substantial tax incentive for attracting foreign investors
in its banking and other businesses. This was achieved through tax refunds based on the
dividends that a local bank distributes to its shareholders. While the headline corporate income tax rate in Malta is 35 percent, the application of a tax refund system positions Malta as the country with one of the lowest effective tax in the EU, which ranges between 0 and 12 percent. The quantum of the tax refund depends on the nature of income and is generally equal to 6/7th of the underlying tax (35 percent), resulting in a 30 percent tax refund of the taxable profits."

Of course, Ireland does not provide such refunds - instead we have a Mega 'Refund' System called Double-Irish.

"In addition, the EU accession in 2004 and the euro adoption in 2008 boosted international banking and non-bank financial sector activities in Malta. Several large banking groups from various countries around the world (Australia, Germany, Saudi Arabia, etc) established their presence in Malta since the mid-2000s. The EU and euro area memberships inspired confidence; the former also allowed non-EU investors an easy access to European markets, while the latter facilitated transactions for EU-based investors. The availability of skilled people and the use of English as the official language also contributed to making Malta an attractive place for doing business by the multinational banks."

You have to laugh reading the above, as you can just replace Malta with Ireland there and nail the regular IDA presentations…

"As a result, the internationally-active banks have become large compared to the size
of the Maltese economy. As of October 2012, there were 13 non-core domestic banks and
8 international banks, with assets of respectively €5.3 billion (80 percent of GDP) and €33.1 billion (500 percent of GDP). The majority of these banks are subsidiaries of EU banks offering a range of services to non-residents that include trade finance, investment banking, and group funding operations."

"Unlike some other EU countries with a big international financial centre (for example,
Cyprus or Ireland), Malta has not experienced any deleveraging pressures in recent years. As a result, measured by the total bank assets to GDP ratio, Malta now ranks higher than Cyprus or Ireland, and is second only to Luxembourg among all EU countries."

All in - the risk is real. This is why IMF (having downplayed it to medium) still posits it as the fifth most significant in overall terms.

Ireland should be seriously concerned.

Note: I wrote about the threats to Ireland from tax policy harmonisation most recently here: http://trueeconomics.blogspot.ie/2013/07/272013-sunday-times-june-23-2013-g8-and.html
And I wrote about Malta's tax dilemma and IMF analysis of it before, here: http://trueeconomics.blogspot.ie/2013/05/1552013-what-imf-assessment-of-malta.html
Posted by TrueEconomics at 3:03 PM