Here's a recently published report on entrepreneurship in Ireland (data through 2012):  http://www.enterprise-ireland.com/EI_Corporate/en/Publications/Reports-Published-Strategies/GEM-Report-2012.pdf

Some points of note, quotes direct from the text, italics emphasis is mine:


More positive trends…..
Another point of interest: "Early stage entrepreneurship is higher among immigrant groups (7.2%) than it is among the non-immigrant population (5.8%) (Table L). This is the case in the other EU-15 countries, with the exception of the Netherlands. Immigrant early stage entrepreneurs are typically motivated by opportunity (73%), which is also the case for non-immigrant entrepreneurs (70%). More specifically, a higher percentage of first generation (3.0%) and second generation immigrants (2.9%) have recently started a business in Ireland, compared to the non-immigrant population (2.2%)."

Role of the recession: "Almost a third of those consulted identified the recession and continuing high rates of unemployment as fostering entrepreneurial activity. The view is that the high unemployment rate has reduced the fear of failure as a deterrent, as people have little to lose. The high unemployment level is forcing people to consider starting up. This point ties in with the continuing high levels of necessity entrepreneurship identified in the 2012 GEM research"

It is worth noting that involuntary entrepreneurship (due to lack of employment) is usually associated with poorer business outcomes.

On funding side: "Informal investors play a vital role in the development of new businesses. In Ireland in 2012, 3.7% of adults reported having provided funds in the past three years (June 2009 to June 2012) to a new business started by someone else. This rate was broadly similar to that reported in 2011 (3.2%). Informal investment is more pervasive in the US (5.4%), across the OECD (4.6%) and the EU-27 (4.5%). The rate in Ireland is more on a par with the EU-15 average (3.4%). The great majority (81%) of the 36,000 individuals, who provided funds as informal investors in Ireland in 2012, provided them to family, friends or work colleagues. Instances of providing investment to entrepreneurs unknown to the investor were much less common (19%)." 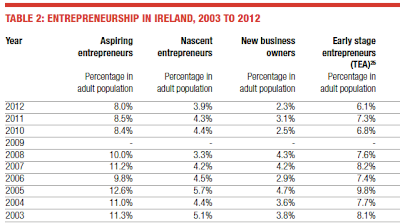 Posted by TrueEconomics at 11:56 AM

Role of the recession - What I find is that the upward part of economic cycle, from an individual's point of view, in Ireland is great at helping one to solve one's own 'short term' planning and get that bolted down really solidly. However, the recessionary, downward part of the Irish economic cycle, seems to be a lot better from an individuals point of view, at working out one's own medium and long term planning (because, my definition the recession forces one to look at 'big blocks' of time, like decade, two decade, . . . retirement age minus current age, equals 'X'). You tend not to do that, look at medium and long term in the upward part of the cycle, from an individual point of view, because by its nature the short term part of the problem (next year or two), is always much easier and more interesting to solve.

We ought to get one idea very clear in our brains at the moment though, in Ireland. Because there is a lot of negativity often thrown at something like 'construction', and hot it became so central to Irish economic activity over a decade, from late 1990s to late 2000s.

I reference Richard M. Stallman's lecture to Irish open source software community at Trinity college Dublin from early 2000s. MPEGs of the lecture can be found to download on Irish website somewhere, and also on YouTube. Stallman makes very clear in that lecture though, the distinction between movement of matter and movement of electrons, . . . and how the former is much more challenging than the later (the later therefore scales up by many orders of magnitude, and in turn software/electrons then finds is own complexity, . . but at a basic, low down level, software engineering is EASIER to do than movement and engineering of physical stuff).

Which is the opposite to how most people think about it. They assume that physical materials are easy, and that it's the 'code' that is complex. But actually, its the other way around.

The thing is, what we have in Ireland is an economy built around the movement of physical material - and unfortunately, all of the opportunities currently (Salesforce, Amazon, DropBox, Facebook, LinkedIn, cloud etc, . . go right down the list), . . . are on the opposite end of the spectrum. So what we have in Ireland, right now, is a boom in the the movement of electrons, within our economy - which perversely has occurred right at a time, at the tail end of when our economy and its people were all focused on the opposite end of the spectrum ! ! !

So, what we witness, naturally enough, in trends of population movement are trades guys moving out of the country (with the objective of finding some pieces of timber that need to get nailed together), at the very same time as 'jobs' in the science of movement of electrons, are flooding into the country - and a lot of the time, which can't find human resources to cater for those jobs!

So we should really try to grasp this larger picture in our minds - and realize that what we are actually good at doing in Ireland, the construction part, is the more complex end of the spectrum. We need to find a way somehow to get to the other end - where as Richard Stallman informs us, the really simple stuff is happening.

I leave this link also to Chris Horn's presidential speech to Engineers Ireland from 2010. It emphasizes too, I think, this relationship between bits and atoms, . . . . which places like MIT have been exploring for decades now, . . . and how it is the relationship between the two, is where all of the 'problem solving' and real business is done. In Ireland, we don't have a policy for 'bits and atoms', but what we do have are totally separated, isolated efforts for each, which don't merge into one another enough. In one decade we go beserk, crazy moving around atoms, . . and in the next decade we do the same with bits - but the 'value' is made, in getting both to work simultaneously.