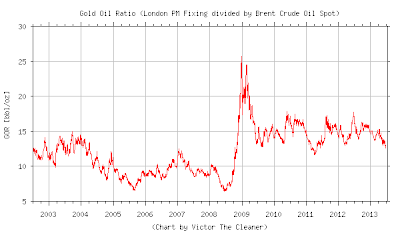 Main points of our research:

For the US data: "… our results discussed above indicate that the oil market does not in general act as a safe haven for stocks. However, we find that oil in fact acts as a safe haven during specific periods, such as around 1990, which is presumably related to the first Gulf War and recently, after the 2007-2009 financial crisis (the “credit crunch”). Moreover, the role of oil following the most recent crisis seems to be continuing. Similarly, oil acted as a safe haven for bonds after the 1987 stock market crash and also, after 2000, which is presumably related to the crash in technology and telecommunications stock on the NASDAQ. These results seem to create a pattern for the role of oil that has not been reported before."

"… we find specific periods in which gold market acts as a safe haven. In particular, for equities, we detect evidence for this after 1990, again presumably related to the war, and also, for the recent credit crunch. The role of gold as the anti-dollar is further confirmed in this analysis, also. Gold can be considered a safe haven for dollar in most of the last decade."

For the UK data: "Our main finding perhaps is that we continue to observe a significant role for the oil market as a safe haven when short time periods are targeted in our rolling regression analysis…  In particular, oil acts as a safe haven for the UK stocks around 2001-2002, which coincide with the technology stocks collapse, and as well as around 2007- 2008, which coincide with another crash in stock values during the “credit crunch”. Moreover, oil is a safe haven for the UK bonds also around 2001-2002 period."

"On the other hand, gold cannot be considered a safe haven for the UK stocks during these equity markets turmoil periods, which should be of interest to market participants."

"Gold, however, continues to play its role as a safe haven against paper currencies with regards to the Sterling, also. Hence, our findings indicate that the attributes of gold in this regards are not confined to the US dollar. We find that gold is a safe haven for Sterling around 1998, which was a period of turmoil in financial markets due to the collapse of the hedge fund LTMC; around, 2001, again a period of turmoil due to collapse in technology stocks as mentioned above; and further around 2007-2008, which is of course the recent global financial crisis."

The core issue the chart above raises is that simplified worldview of gold (or any other asset class) as a pure 'absolute return' play. Instead, every asset should be considered in the context of total portfolio of assets being held, including risk-adjusted returns the asset offers and hedging and safe haven properties it affords.
Posted by TrueEconomics at 10:06 AM