The second part of my regular WLASze (Weekly Links on Arts, Sciences and zero economics)... enjoy!


Part one is available here.

Let's start the second WLASze for the weekend we are in from science. The cognitive science to be more precise. Basically, in a summary, there's a myth that once we hit twenties, we are already matured, formed and, although conditions and our responses to them do change, we are basically 'emotional intelligence'-wise pre-determined. I am not so sure if my own recollection of my twenties supports this myth, but someone, somewhere, in large enough numbers believes it to be true.

It turns out this is not the case (which makes me at my 45 at last being on the sane side of an argument about my own twenties). And here's an article arguing the point: "The brain is going through a second critical period of growth," she explained. "The brain doesn't finish developing until some time in your twentysomething years. Being more specific, the pre-frontal cortex doesn't reach maturation until some time in your twenties. This is the last part of the brain to have evolved; it's the last part of the brain to mature. For our purposes, what's important to know about the pre-frontal cortext is that this is the part of the brain that thinks about time, probability, and uncertainty."

PS: I have no idea who the Girls are, but they look like something of a horror flick, where a bunch of giggly cheerleaders are about to be terrorised by a crazed alien that emerges from their mom's smile...


With alien worlds, then, here's a tale of a speedy demon: basically, someone digging through old data from that relic of the technology past that keeps on ticking - the Hubble Telescope - has spotted a little dot - a new Moon of Neptune. Quote d'resistance: “This is a moon that never sits still long enough to get its picture taken”. The thing flies around at a speed of ca 16,174 miles per hour.

Staying with the theme of speed: ArsTechnica reports about the black hole that sucks gases at a speed of 10 million kmph or 6.21 million mph or 384 times faster than the Neptune's newest moon moves at. For those old enough to remember Ross Perot (no, not Hercule Poirot) can certainly see now where his famous reference about the 'giant sucking sound from the South' coined 21 years ago has some tangible traction... No, not in Texas, yet...


Shifting the gears from pure science (no, not Ross) to a grey area between science and arts: amasing visualisation of numbers properties: here is visualisation of π, φ and e: http://mkweb.bcgsc.ca/pi/art/ 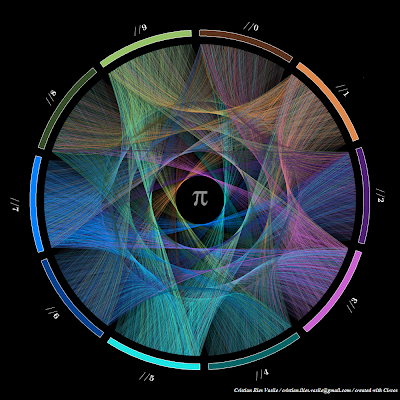 And while on the topic: progression and transition for the first 2,000 digits of e: 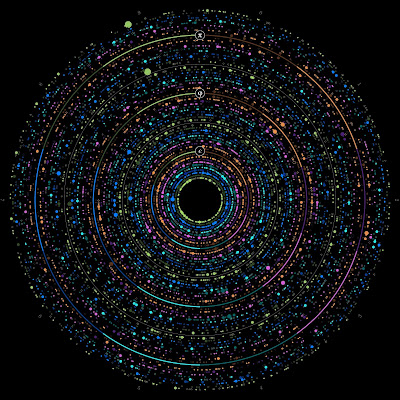 I have always argued that:

Need more evidence? The above was a trip from math to art. Now, from art to math by Roman Opalka: 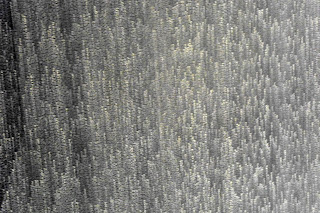 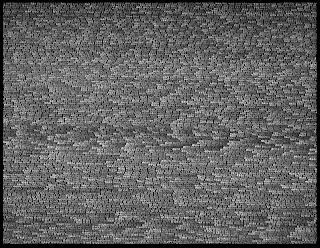 Moving on from the methodologised (or theorised) madness of subtle beauty, but staying with the boundary between art and science theme, here's an interesting post on the evolution of typography and design in scientific publishing. Here's an oldest (albeit not the best designed) academic journal: 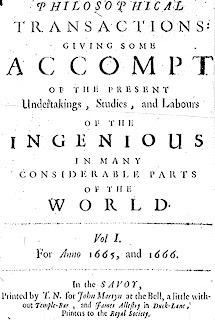 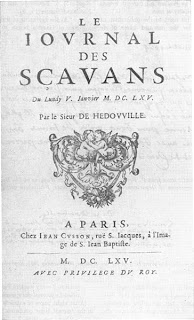 Thankfully, we don't have to fight this one, though the French design definitely beats the UK dysfunctional plain-face approach to jumbling together a page of text made up of some 10 fonts and about as many font sizes...

More on history, this time - a new discovery from the Mayan civilisation. The discovery relates the tales of political battles that raged in the Dark Period (dark because we know little about it, although the entire Mayan civilisation was not exactly 'light' when it came to ethics, but...). This dates back to AD 550-560s, as my reading of the article suggests and gives us the names of two kings we didn't know about... Meanwhile in Europe Justinian's boys smuggle contraband silkworms from Asia and Black Death is all the rage across the continent... Also, rather not very light-filled years...

Silkworm was smuggled from China back in AD 553. In return, we brought Chinese art back into the fold of 'thinking art' (away from pure propaganda utilitarianism) ca AD 1980s (yep, it took that long and even as late as 1989, the Chinese Communist Party was not too keen on modern art, especially when the bosses shut down the first modern art exhibition held in China in February 1989). But as with silkworm taking hold in Europe, it will take time for art to take hold in China, although the country art scene has been hugely dynamic and original. The reason for it is that we are now into the early stages of the second generation of Chinese (resident) artists that have any capacity to think beyond the constraints of the limited vocabulary and philosophy of Communist art (Socialist Realism).

To see this, go no further than this example of a superb online flip book of contemporary Chinese artists in Paris: http://flipbook.kohn.fr/private-sale_chine-a-paris/ Much of this is 'soft' - excitingly interesting for its novelty and naivety factors, but conceptually and artistically boring. Take numbers 10 and 11 - iconoclasm does not work in Western art context. 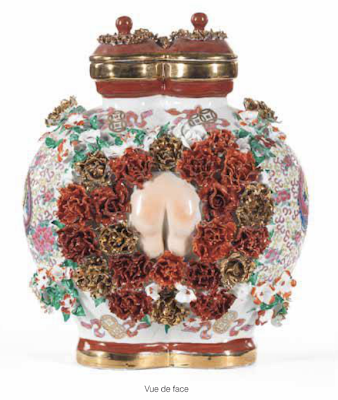 Not since we broke the taboos of strictly dogmatic interpretation of the subject of art as drivers of form - the school of thought that dominated pre-Rinascimento and then occasionally re-floated under various political regimes throughout the ages, including in the 1930s-40s in fascist states and subsequently in the Warsaw Pact (plus Yugoslavia and Albania). Stuff like the above is now mostly kitsch, unless it has a historical (as opposed to artistic) value. Don't tell the fans of late (post-abstract minimalist) works of Jeff Koons: 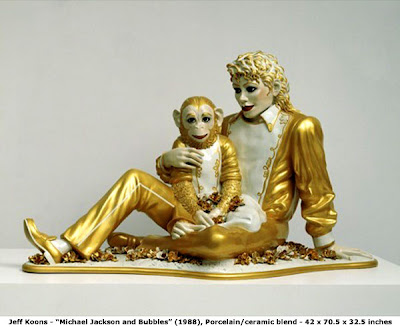 Efforts at abstract art as well as reinterpreted traditionalist expressions represented in the e-book on Chinese art in Paris remind me of the period in Russian art around 1988-1998 when Russian artists raced to catch up with the Western vocabulary, philosophy, composition and theory, and semiotics. This process in Russian art is now exhausted, largely, although the market for Russian art still shows strong interest in that expressionist nostalgia for preservation of any departure from the past norm, even if that departure relies on the very same norm for juxtaposition-defined raison d'etre.

Stay tuned for Part 3 of WLASze coming up later tonight.
Posted by TrueEconomics at 4:28 PM