Irish Manufacturing PMI is out today and I can't really report much on the subject - the Investec - Markit continue to put out qualitative analysis in place of what used to be very informative press releases.

The PMI data is seasonally adjusted, which makes y/y comparatives slightly questionable, while normal volatility makes m/m comparatives pretty much meaningless. Note: despite the seasonal adjustment data remains Laplace-distributed. In the past, it was possible to make some educated guesses as to the underlying drivers of the PMI by looking at trends in components. Now - it is impossible.

But ok, let's deal with the headline PMI alone.

The headline PMI reading is not as ugly in June as it was in March and April (PMI average at 48.3), but not pretty either.

We have a statistically insignificant rise in the overall index reading of 0.6 points (bi-directional standard deviation for this data is at 4.37 for full sample, 4.28 since 2000 and 5.21 since 2008).

The increase brings us notionally above 50 to 50.3, for the first time since February 2013, but
1) This is not a reading that is statistically significantly different from 50.0 (STDEV is at 2.19 for difference from 50 and the skew is -1.46, so 0.3 is not significant)
2) Current reading still remains consistent with negative trend set on around 12 months ago. Next 1-2 months will be critical in either confirming the trend or potentially signalling an inflection point. Then again, next 1-2 months will be peak of summer, and will be unlikely to tell us much.
3) 50.3 reading in June is identical to January 2013 and is below 12mo MA of 50.9, and is about identical to the 3mo average through March 2013 at 50.1. 3mo average reading through June is below 3mo averages through June in every year 2010, 2011, 2012.

Core conclusion: output did not, in any normal statistical likelihood, return to growth yet, although PMI reading did come to around 50 from the upside (50.3)… it was also around 50 back in May (49.7) but on the downside.

Per Investec, there was "a further reduction in new orders, although the latest decrease was only fractional, and the slowest in the current four-month period of decline. New export orders, meanwhile, fell at a faster pace than in May." We, of course, have no idea just how far these reductions have taken the two sub-indices, because Investec and Markit are no longer giving us actual sub-index readings. 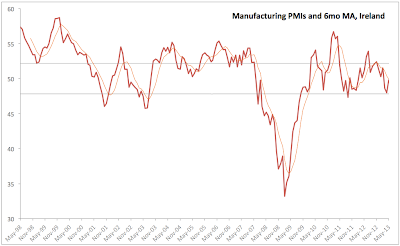 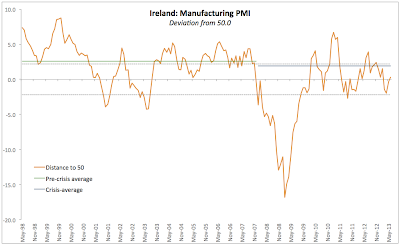 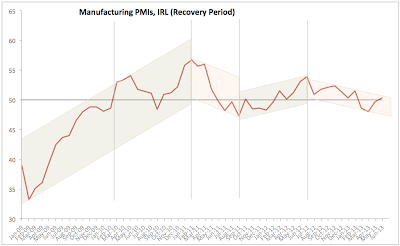