In the previous post I covered in detail the dynamics of the Services PMI (here) and few posts back, I covered Manufacturing PMIs (here). Now, lets take a look at both together. 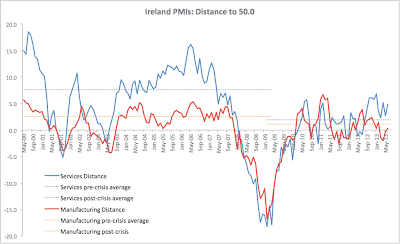 Chart above shows the deviations of both PMIs from 50.0, with pre-crisis and post-crisis averages.
The relative weakness in Manufacturing performance, from the end of Q2 2011 through current is pretty much apparent. Both, manufacturing and services PMIs signaled much stronger growth conditions prior to the crisis, than since the beginning of 2010.

The most significant decline took place in Services, with the pre-crisis average deviation from 50.0 at 7.6 falling to 1.9 average deviation in post-January 2010 period. With STDEV at 6.5 since 2008 (7.4 prior historical), and with skew at -0.7 and kurtosis at 0.73, we are nowhere near average deviation being statistically significantly different from zero since the onset of 'recovery'.

Manufacturing decline has been more modest, given weak rates of growth in pre-crisis period. The average rate of pre-crisis deviation from 50 was 2.6 and that well to 1.1. With historical STDEV of 4.2 and STDEV since 2008 at 5.2, skew at -1.6 and kurtosis of 3.24, this is again indistinguishable from zero growth conditions.

On slightly better side of things and along shorter-run dimension, 3mo MAs are both above zero, but, once again, none are statistically significantly different from zero. 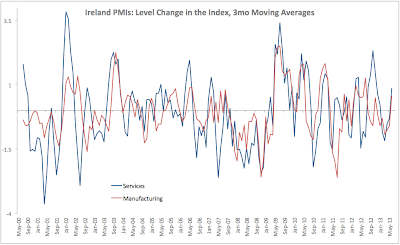 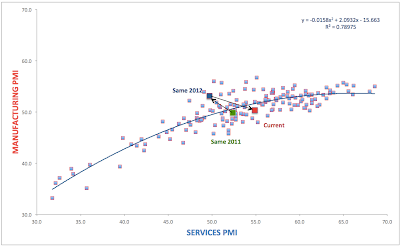 Irish PMIs have, however, very tenuous link to actual economic growth. Here are two charts showing this week relationship for log-log growth terms, but exactly the same picture is confirmed by taking simple level deviations in PMIs from 50, as well as for linear and cubic relationships (for robustness): 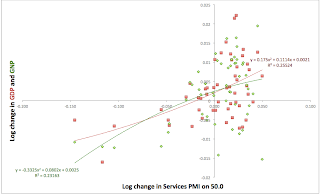 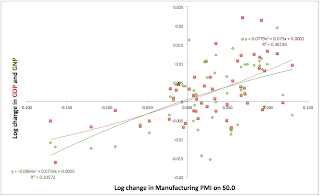 It is quite telling that Services PMIs have much weaker explanatory power for GDP and GNP growth than Manufacturing PMIs, confirming that Irish services, dominated by ICT and IFSC tax-optimising MNCs are not as relevant to Irish economy as manufacturing sectors.

Another telling thing is that both for Services and Manufacturing, the sectors activity as measured by PMIs has stronger relationship with GDP than GNP - which is also predictable, once you consider the PMIs heavy slant toward MNCs.


Note: raw data on PMIs levels is taken from Markit-Investec releases, with all analysis above, as well as deviations from 50 and all other transformations, including quarterly data computations, undertaken by myself. These transformations and analysis are intellectual property of my own and should not be cited without appropriate attribution.
Posted by TrueEconomics at 11:33 PM