CSO released new data on domestic travel by Irish residents for Q1 2013. Overall, there has been a marked decline in the total number of trips as well as outbound trips (details here: http://cso.ie/en/media/csoie/releasespublications/documents/tourismtravel/2013/hotra_q12013.pdf).

However, even more revealing are the sub-series for Holiday Trips: 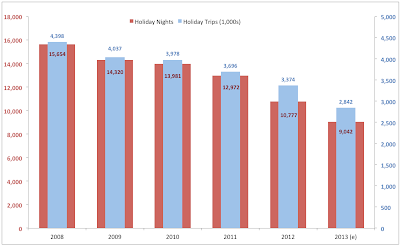 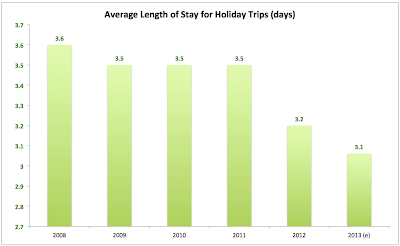 Note: 2013 (e) estimates are based on Q1 2013 data adjusted for effects of normal seasonal variation. Since we have very little data to go by, these are very much indicative of the direction in the series, rather than of actual numbers in terms of absolute declines expected.

Data shows sustained declines in domestic trips undertaken for holiday purposes by Irish residents. Weather effects are of course a factor, but it is worth noting that holiday travel abroad by irish residents also contracted y/y in Q1 2013. In other words, it looks like even disregarding weather conditions, things are grim.

Now, keep in mind that the Government has spent two years now 'actively stimulating' travel sector here. And there have been plenty of noises coming from the tourism sector and Irish officials about alleged boom in Irish families substituting away from vacationing abroad in favor of domestic travel. This substitution is yet to show up. Instead we are facing faster contracting demand for domestic holidays travel, slower declines in outbound travel and an overall decline in all holidays travel...

Something that can be expected in an economy in its fourth recessionary 'dip' since 2007 and with domestic demand down for 17 quarters out of last 25.
Posted by TrueEconomics at 10:41 AM