The Central Bank of Ireland released the data for holdings of Irish Government bonds for May 2013. Alas, these are not well-defined, as one category, MFIs & Central Bank, pools together two distinct groups of investors.

Here is the data analysis.

The numbers below reference, in addition to those reported by the CBofI, the holdings ex-Promissory Notes. recall that in February we have converted Anglo Promo Notes (EUR26bn worth of the stuff net) into Government bonds. These are held by the CBofI and have nothing to do (for now) with the private demand for Government bonds.

Resident MFIs and CBofI holdings of Government bonds rose from EUR16.671 billion in May 2012 to EUR48.943 billion in May 2013 or controlling for Promo Notes - to ca EUR23.04 billion. 3mo average through May 2013, adjusting for Promo Notes, rose 37.15% y/y. In other words, if contagion conduit between banks and sovereign can be identified with the extent of the banks holdings of Government bonds (and it can be, in part and among other things and with some caveats), then clearly that conduit has gotten larger over the last 12 months, not smaller. I wrote about similar effect in the case of Spain and Italy here: http://trueeconomics.blogspot.ie/2013/06/2962013-banks-sovereign-contagion-its.html

Meanwhile, holdings of Irish Government Long-Dated Bonds by the real resident investors, such as Households and Non-Financial Corporations, have fallen from EUR197 million in May 2012 to EUR193 million in May 2013. 3mo average through May 2013 was down 4.6% y/y. All in, real investors - as opposed to financial institutions, central bank, government and financial intermediaries - held just 0.17% of all Irish Government bonds outstanding in May 2013, down from 0.24% in May 2012. 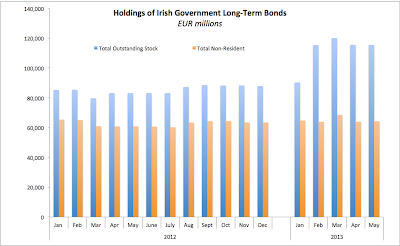 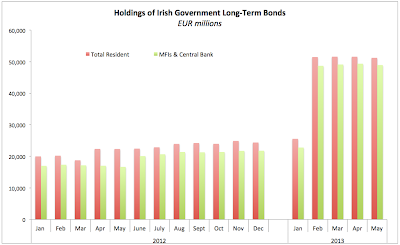