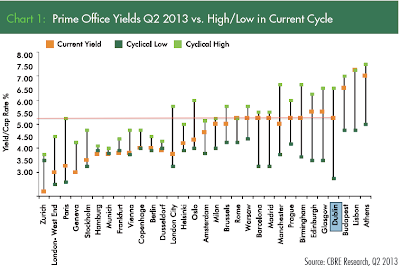 In the above, I added the red line for referencing current yields to other urban locations across the EU. Pretty much suggests current valuations are in line with current macro fundamentals. Also, the chart above shows just how much more dramatic the swing has been from the cycle high to the cycle low in Dublin - wider than anywhere else.

Does this mean the market is now priced about right? Barring any dramatic improvement in the fortunes, I can't see much of an organic upside here. That said, external investment demand and longer-time investment horizons can (and probably will) push prices up. On the downside, there is the pressure of cost of long term funding news acquisitions.

On the shorter end, there are strong signs of market recovery. Per CBRE: "There was a significant improvement in transactional activity in the Irish investment market during the first half of 2013. In total, there were 34 investment transactions of more than €1 million in value completed in the six month period. In total, €603 million was invested in the first half of 2013, compared to a full year spend of €545 million in 35 transactions in the entire year last year."

More on the good news side: " Total returns in the Irish market in Q2 2013 increased by 2.3% while capital values were flat in the period according to the Investment Property Databank (IPD) Irish Index. Indeed, total returns in this index have been positive for seven consecutive quarters now." However, the chart shows continued negative capital returns: 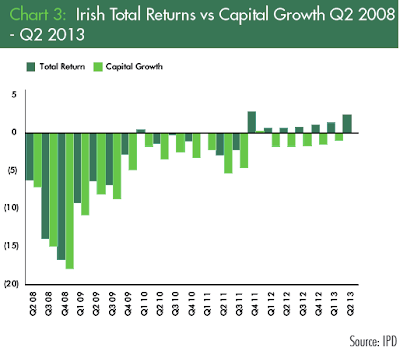 The chart also shows that cumulated total returns over the positive 7 quarters are just about cover total losses cumulated from Q4 2009 -Q1 2010.

The headwinds remaining in the market, in my opinion are:


For now, however, my feeling is that the yields are close to fundamentals-determined equilibrium.
Posted by TrueEconomics at 9:02 PM