Necessity is a mother of all inventions. Necessity of recent commands that those of us who care to do an in-depth analysis of Irish data have to scale back analysis of the PMIs. The reason for this is that Investec and Markit are no longer publishing in a general release any relevant data concerning the PMIs components. In the case of Services PMIs, Markit went even farther:

All that is left for any non-profit analysts like myself is to take the few numbers still being reported on an ad hoc basis, and make most of them. Sad to see years of data & analysis models going to waste because Markit & Investec don't really understand how to work with new media and independent analysts.


Here is the updated trends analysis for Services Sectors PMI (my earlier post on Manufacturing PMIs is here):


Charts below illustrate the trends: 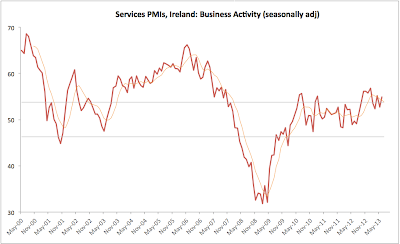 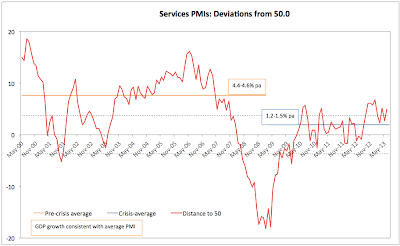 Chart above shows that, despite the robust growth, we are in a secular slowdown in underlying growth when it comes to Services sectors. In pre-crisis period, average PMI ranged 7.6 points above 50.0, which was consistent with roughly GDP growth of 4.4-4.6 percent per annum. Since the 'recovery on-set, average PMI is above 50.0 by 1.9 points, which is not statistically significantly distinct from zero growth in the sector. it is also consistent with average GDP growth of ca 1.2-1.5% per annum.

Now, keep in mind: these are Services, heavily dominated by exports-driven ICT and Financial Services - in other words, this is the sector of the economy where the 'exports-led recovery' story has been the rosiest since the 'official' end of the crisis.

Stay tuned for my combined series analysis for Manufacturing and Services PMI.

Is any other financial institution going to take over the ownership of the pmi data?