8/7/2013: IMF on Euro Area: Repetition in the Endless Unlearning of Reality

The Statement reads (emphasis mine):
"Policy actions over the past year have addressed important tail risks and stabilized financial markets. But growth remains weak and unemployment is at a record high."

So what needs to be done, you might ask? Oh, nothing new, really. Euro area needs:
-- To take "concerted policy actions to restore financial sector health and complete the banking union". Wait… err… this was not planned to-date? Really?
-- "continued demand support in the near term and deeper structural reforms throughout the euro area remain instrumental to raise growth and create jobs". In other words: find some dish to spend on stuff and hope this will do the trick on short-term growth. Reform thereafter.

Not exactly encouraging? How about this: "…the centrifugal forces across the euro area remain serious and are pulling down growth everywhere. Financial markets are still fragmented along national borders and the cost of borrowing for the private sector is high in the periphery, particularly for smaller enterprises. Ailing banks continue to hold back the flow of credit." So the solution is - more credit? Now, what did we call credit in old days? Right… debt, so: "In the face of high private debt and continued uncertainty, households and firms are postponing spending—previously, this was mainly a problem of the periphery but uncertainty over the adequacy and timing of the policy response is now making itself felt in falling demand in the core as well." Wait a second, now: more credit… err… debt will solve the problem, but the problem is too much debt… err… credit from the past…

Ok, from IMF own publication earlier this year, what happens when credit - debt - is let loose: 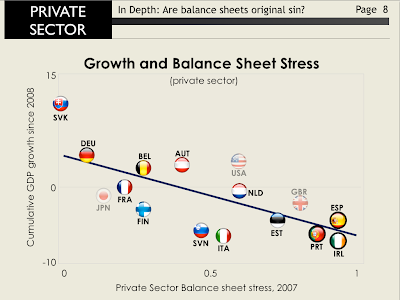 
Just in case you need more of this absurdity: "…reviving growth and employment is imperative. This requires actions on multiple fronts—repairing banks’ balance sheets, making further progress on banking union, supporting demand, and advancing structural reforms. These actions would be mutually reinforcing: measures to improve credit conditions in the periphery would boost investment and job creation in new productive sectors, which in turn would help restore competitiveness and raise growth in these economies. A piecemeal approach, on the other hand, could further undermine confidence and leave the euro area vulnerable to renewed stress." Oh, well, 5 years ago we needed

"A credible assessment of bank balance sheets is necessary to lift confidence in the euro area financial system." Ok, we had three assessments of euro area banks - none credible and all highly questionable in outcomes. Five years in, we are still waiting for an honest, open, transparent assessment.

Cutting past the complete waffle on the banking union and ESM, "The ECB could build on existing instruments—such as a new LTRO of longer tenor coupled with a review of current collateral policies, particularly on loans to small and medium-sized enterprises (SME)—or undertake a targeted LTRO specifically linked to new SME lending." Ooops, I have been saying for years now that the ECB should create a long-term funding pool for most distressed banks, stretching 10-15 years. Five years into the crisis - still waiting.


On structural reforms, IMF is going now broader and further than before and I like their migration:

"For the euro area, …a targeted implementation of the Services Directive would remove barriers to protected professions, promote cross-border competition, and, ultimately, raise productivity and incomes. A new round of free trade agreements could provide a much-needed push to improve services productivity. In addition, further support for credit and investment could be achieved through EIB facilities. The securitization schemes proposed by the European Commission and the European Investment Bank could also underpin SME lending and capital market development." Do note that the last two proposals are still about debt generation (see above).

"At the national level, labor market rigidities [same-old] should be tackled to raise participation, address duality—which disproportionally hurts younger workers—and, where necessary, promote more flexible bargaining arrangements. At the same time, lowering regulatory barriers to entry and exit of firms and tackling vested interests in the product markets throughout the euro area would support competitiveness, as it would deliver a shift of resources to export sectors [ok, awkwardly put, but pretty much on the money. Except, greatest protectionism in the EU is accorded to banks and famers, and these require first and foremost restructuring]."