Here's why France been downgraded last week and why it's outlook is stable: 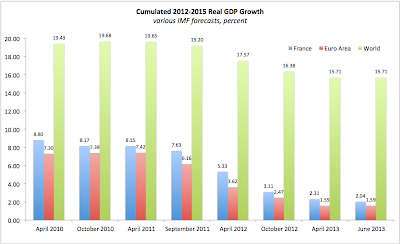 The chart shows pretty clearly that over the last three years, outlook for the French economy has deteriorated and deteriorated just a notch faster than that for the Euro area. In other words, France - expected to outperform Euro area by 150 bps on real growth in April 2010 is now expected to outperform euro area by 45 bps. Meanwhile, relative to the world growth forecasts, if France was expected to grow at a rate that was around 45% of the world growth rate forecast back in April 2010, today it is expected to grow - on a cumulated basis between 2012 and 2015 - at the rate that is just 13% of the world rate.

It really all is that simple: France is basically priced as Euro area and Euro area is not warranting a AAA risk rating.
Posted by TrueEconomics at 10:04 PM