Is ECB policy too tight, about right or too loose? Well, the answer depends on many factors and metrics of choice. One metric is the cost of credit to the private sector - influenced in part by the ECB benchmark rates and in part by lending conditions and environments. The two forces are not independent of each other, however. More specifically, markets conditions (e.g. raging sovereign debt crisis in the euro area in the 2010-2011) can have impact on how monetary policy is transmitted. Put differently, in addition to banks --> sovereign transmission of risks, there is also sovereign --> private sector credit transmission mechanism.

"The Impact of the Sovereign Debt Crisis on Bank Lending Rates in the Euro Area" by Stefano Neri, June 20, 2013, Bank of Italy Occasional Paper No. 170  argues that "since the early part of 2010 tensions in the sovereign debt markets of some euro-area countries have progressively distorted monetary and credit conditions". This resulted in constriction of "the ECB monetary policy transmission mechanism and raising the cost of loans to non-financial corporations and households." The study looks at the role that the sovereign markets tensions played in determining bank lending rates in the main euro-area countries. The author finds that sovereign debt markets tensions "have had a significant impact on the cost of [private sector] credit in the peripheral countries". More specifically, "if the spreads had remained constant at the average levels recorded in April 2010, the interest rates on new loans to non-financial corporations and on residential mortgage loans to households in the peripheral countries would have been, on average, lower by 130 and 60 basis points, respectively, at the end of 2011." 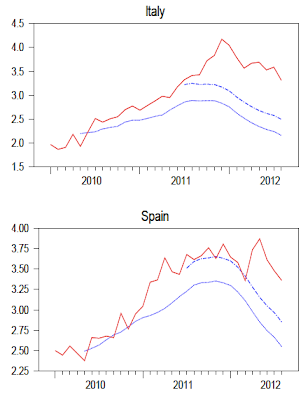 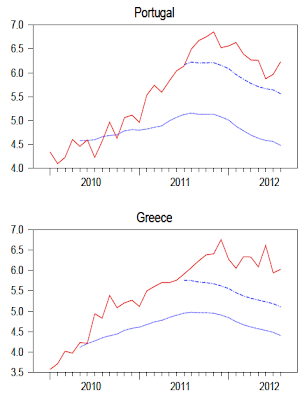 Posted by TrueEconomics at 7:11 AM