-- "Activity contracted by 0.3% in Q1 2013, falling for the sixth consecutive quarter."
-- "GDP growth is expected to turn slightly positive in Q2 2013 (+0.1%), with a mild acceleration over the following quarters (+0.2% in Q3 and +0.3% in Q4)."
Core drivers:
-- "...progressive improvement in exports and a marginal recovery of domestic demand in the second half of the year."
-- "…fiscal consolidation and ongoing deleveraging in corporate and banking sectors of several Eurozone economies will continue to weigh on economic growth."
-- "Labor market conditions will remain unfavorable, placing an additional burden on disposable income and private consumption."
-- "Due to tight credit conditions and weak prospects for internal demand, gross fixed investment is also expected to remain weak."
-- "Exports growth and the need to replace an ageing capital stock will lead to a modest investment recovery in Q3 and Q4 2013 (+0.1% and +0.4% respectively)."
-- "Under the assumption that Brent oil price remains stable at USD 103 per barrel in Q3 and Q4 and the euro/dollar exchange rate fluctuates around 1.30, inflation is projected to 1,3% in Q4."

Core caveat: "This forecast assumes that financial tensions in Europe do not escalate and a gradual unwinding of the monetary policy stimulus in the United States."

My view: optimistic assumption on inflation and EURUSD rate, but generally, agree with Q2-Q3 outlook as a central scenario. Risks are rising, however, by the day. 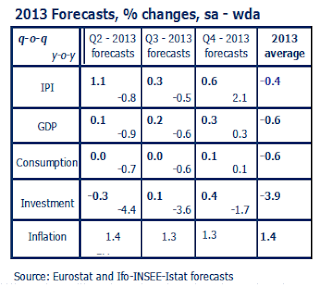 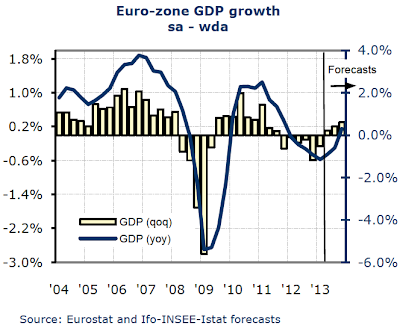 Posted by TrueEconomics at 4:34 PM