ITALY'S GENERAL GOVERNMENT DEBT: €2.074 trillion (setting a new all-time record) and up on €2.0413 trillion prior… in other words, all is going according to the EU 'sustainability' plan.

A gentle reminder, back in April 2013, IMF forecast for Italy's 2013 GGD was EUR2.0405T, so that fiscal consolidation, then, is outperforming the targets, clearly… In fact, IMF forecast for 2014 GGD was EUR2.08055, so Italy is well into getting to 2014 target by the end of 2013. Keep digging, folks. Perhaps a French solution of raising taxes? Just for 'fairness' sake.

A chart via Ioan Smith @moved_average : 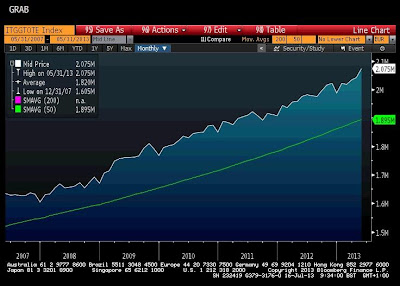 To update: via @lemasabachthani two charts: 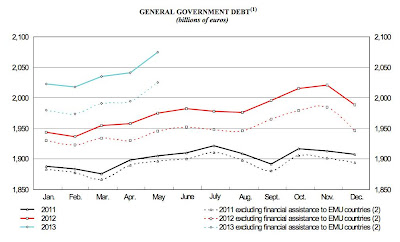 Notice in the above chart the evolution of debt over years. And recall that Italy is cutting and cutting deficits. Clearly, something is amiss: there is austerity and there are continued increases in debt in levels terms, as well as in GDP-referenced terms. In other words, forget growth effects of austerity - Italian-styled policies are not cutting Government spending.

Also, notice the effect of the absurd Euro area 'solution' system whereby already over-indebted country like Italy is forced to take on more debt to fund 'adjustment' programmes for the peripheral states.

But even disregarding the above absurdity, there is a new spiking in funding requirements for the Italian Treasury. 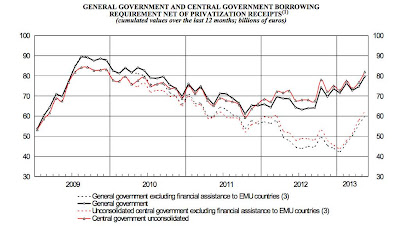 Posted by TrueEconomics at 10:06 AM