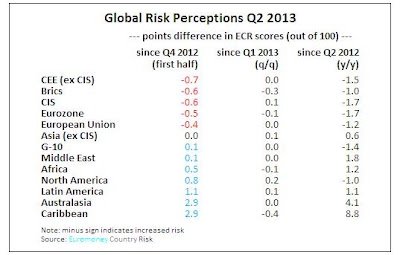 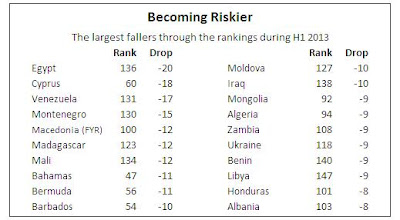 One area of interest from my personal perspective: Russia: 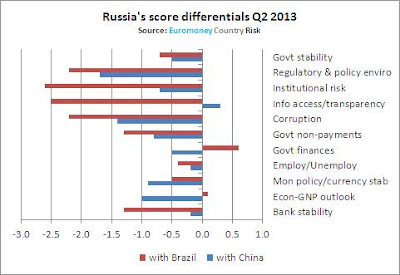 "With one or two exceptions, the majority of former Soviet independent states, alongside Russia, have become riskier this year, continuing longer-term trends.

Diminishing economic growth is imparting a negative impact on the region, especially in light of the slowdown in Russia (Russia: Stagnant oil price dampens economic outlook).

However, the risks are also tied to worsening perceptions concerning other indicators, and for a variety of reasons, ranging from Russia’s institutional underpinnings and corruption record, and government stability in Azerbaijan, to currency and information access/transparency concerns in Ukraine and Georgia’s regulatory and policy environment.

The Kyrgyz Republic and Moldova – the latter especially – have seen their political risk profiles downgraded sharply, highlighting the region’s flaws, its failure to capitalize on the eurozone’s worse risk-return opportunities, and why Russia, ranking 62nd globally, is still the only country to score more than 50 out of 100."

My full view is as follows:

In my view, increased risks associated with the Russian economy relate to the lack of structural drivers for growth, lagging reforms and low returns on reforms already enacted, plus the overall downward revision of the emerging markets and commodities in the environment of highly uncertain and subdued global growth.

Russian Government drive toward modernisation of the economy has dramatically slowed down and is no longer appearing to be a long-term priority for policy development. At the same time, investment in the economy has fallen off the cliff due to a combination of exhaustion of construction investment, Cyprus crisis, continued low FDI and reduced overall economic growth, as well as the perception that tax increases are likely in the near future. Looming ruble devaluation is reducing both FDI and internal investment.

Institutional capital is lagging and remains largely un-effected by reforms rhetoric. If anything, last 24-30 months have seen sustained deterioration in reforms efforts. The comprehensive agenda for modernisation of the economy has been pretty much frozen, if not abandoned.

On the longer-term horizon, emergence of alternative energy supplies and shale gas reserves development worldwide is starting to feed through to the forecasts for future current account and earnings capacity of the Russian economy.

However, there is a negative bias built into markets analysts expectations and assessments of the Russian economy, compared to other BRICS. Brazil and India have largely unsustainable models of longer-term growth driven by internal investment dynamics, instead of institutional capital build up, China is a massive credit bubble ready to blow with current account surpluses acting as the only potential buffer, given already extensive expansion of credit and money supply undertaken, and South Africa is hardly a sustainable, or significant in global terms, economy by any measure. In my opinion, Russia's economic future is highly uncertain. But of all BRICS - Russia has the best potential for stable and sustainable growth based on intrinsic workforce and domestic investment and demand potentials. Whether it will realise these potentials is a different matter.
Posted by TrueEconomics at 9:48 AM