Retail sales stats are out for June and anticipation (based on the booming Consumer Confidence index from ESRI) was for a significant uplift in sales. Alas, things turned out to be not what some expected. All data seasonally-adjusted. 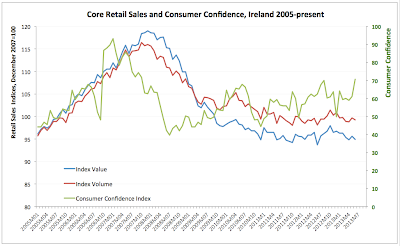 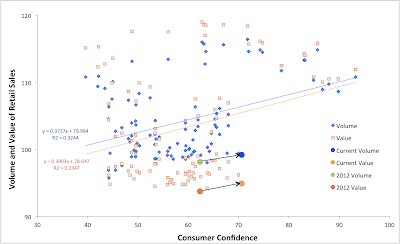 Charts above show clear disconnect between retail sales (volume and value) and the reported consumer confidence index. The disconnect is bizarre. Firstly, neither current, nor lagged average consumer confidence has much to do with either volume or value of what consumers opt to purchase. Worse, since June 2008 through June 2013, Irish retail sales indices correlations with Consumer Confidence are -0.66 for value index and -0.60 for volume index. In other words, rising Consumer Confidence in Ireland tends to be associated with falling retail sales. It is worth noting that prior to the crisis - in January 2005 - December 2007 period, the above correlations were +0.72 and +0.74 respectively.

My own Retail Sector Activity Index has had a better fortune tracking overall activity in the retail sector: 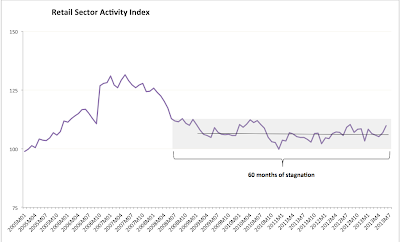 The above clearly shows the sustained 'flat at the bottom' period of retail sales overall activity (by weighted contributions of volume, value and forward confidence). The recent rise in the activity, driven so far solely by two factors: year-on-year dynamics still impacted by the losses made in May-June 2012  and by the bizarre rise in consumer confidence. It remains to be seen if the index can hold near a 14 months period high attained in June.

Posted by TrueEconomics at 10:44 PM