CSO has published Q3 2012 survey concerning the Effect on Households of the Economic Downturn: here.

And a handy chart summarising demographics of debt crisis: 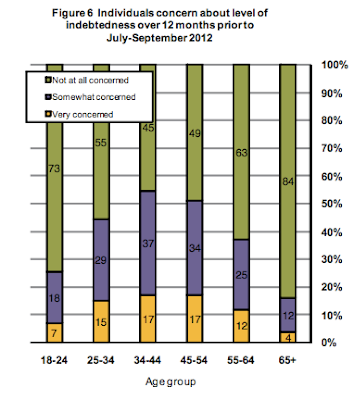 That's right: core crisis impact on debt side - 25-54 year olds, majority with kids and homes, just the crowd that the Government is targeting for cash extraction via higher prices and charges for services like health, health insurance, transport, energy, utilities, education... you name it.

And as you read data in Table 1.1.1. showing details of the households experiencing financial difficulty due to loss of income, classified by main reasons over 12 months prior to July-September 2012, keep in mind - almost all 'employment creation' in the labour market that the Government and 'green jerseys' keep talking about is taking place in the part-time jobs, which cannot cover the true cost of living in this country.

Finally, take a look at Table 1.2. This shows the extent of debt restructuring delivered by the 'reformed' banks. At 7% total - it is laughably low.

Posted by TrueEconomics at 3:23 PM