On foot of my post detailing Irish cumulated figures for trade in goods for H1 2013, some asked me to post on the relationship between exports and trade balance. Here are few charts, taking snapshot from H12000 through H1 2013: 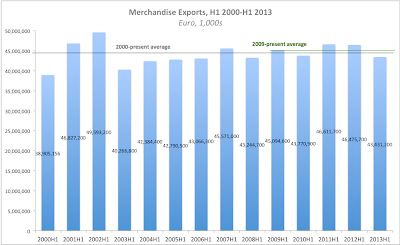 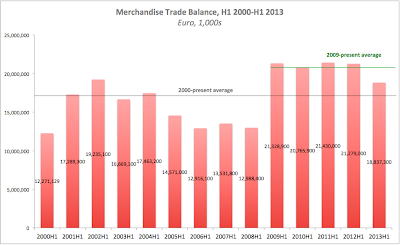 To see this, let us plot exports against trade balance: 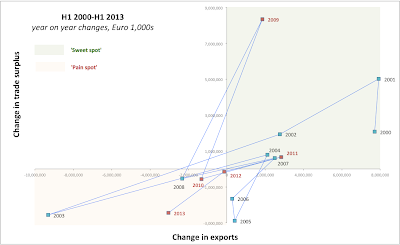 The last chart clearly shows that in 2009-2013, on average, exports were tracking changes in trade balance, but they were not doing so 1:1.

More interestingly, the chart shows that trade in goods in Ireland is in trouble. In 2009-2013 period, Irish Government policy has been to rely solely on exports (of goods and services) in driving the economy toward recovery and debt sustainability. This hope rests on growth in exports and simultaneously positive trade balance and growing trade balance as the key parameters for consideration when it comes to both economic growth and debt sustainability.

Alas, in years 2010, 2012 and 2013 (in other words in 3 out of 5 years), measured by H1 figures alone, Irish goods traded operated in the 'pain spot' region - the region of shrinking exports and shrinking trade surpluses.

In other words, in terms of levels our merchandise trade is performing well. But in terms of growth it is performing poorly. And this is despite a huge drop-off in imports, something that is not likely to last when the economy goes back to capital investment (imports of capital goods will rise) and/or consumption recovery (imports of consumption goods will rise).
Posted by TrueEconomics at 11:19 PM