On foot of the latest data from the QNHS (broad trends analysis here), let's take a look at the broader measures of unemployment, as reported by the CSO (with the last measure: PLS4+STP being compiled by myself based on CSO data from the Live Register and QNHS).

Here are the core definitions, used: 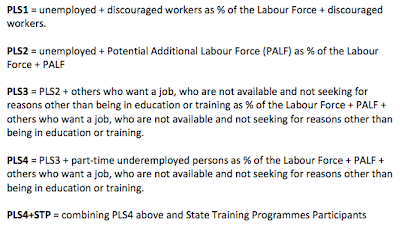 And the numbers are: 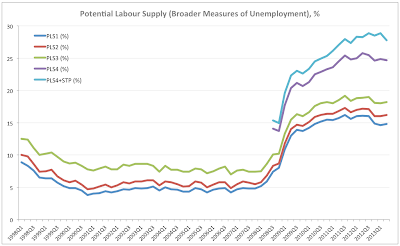 Summary of y/y and relative to peak changes recorded in Q2 2013 is here: 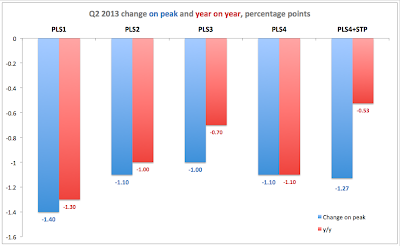 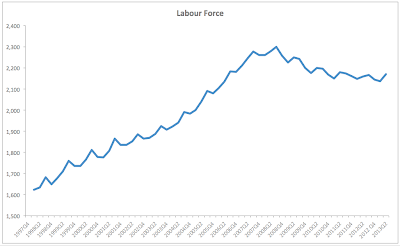 Summary: Broader unemployment and underemployment metrics are improving y/y but not q/q. The broadest measure PLS4+STP down very marginally y/y by just 0.5 percentage points. This is hardly encouraging. On a positive side, all metrics are showing signs of stabilisation, albeit at very high levels of unemployment and underemployment. In most basic terms, with 27.8% of our broader potential workforce either unemployed, underemployed or in state training programmes, we have a real problem on our hands, still, and it is not getting better at any appreciable rate of improvement.
Posted by TrueEconomics at 12:46 PM

It's amazing how much unemployed labour that the retail sector has an ability to release into the economy in very rapid fashion. Even quite modest retail businesses can release 20-50, or even 100 people or more on to the jobs markets over night.

In retail in particular, we need some work to be done. What companies maybe need to appreciate is that in the 2010s the game has changed. In the 2000s, it was about a 'bricks and mortar' presence mainly, with some kind online presence (maybe put together by a one-man band with a bit of coding experience).

In the 2010s, its more the other way around. Its a strictly online kind of game, with the 'bricks and mortar' presence serving some kind of function, to support the major online one.

But any businesses that I have spoken to, are stubborn in growing up to that realization. For instance, the consumer has virtually no interest in interaction with a hundred different 'unique' retail portals, each connected back to some tiny store located somewhere in an Irish town or city. What consumers want to do, is to deal with an aggregator, a group of retailers who sell together through the same online system. That is, only 'one' thing that the consumer has to learn and interact with.

Retail think tanks and support bodies, agencies etc have really let the greasy wet football slip through their hands here I'm afraid in Ireland. In every government statement about enterprise, we hear about how 'small and nimble' that we are, . . and every few months there is a new encyclopedia of stuff published in newspapers, journals and Forfas reports about being 'small and nimble'.

But all we keep seeing each and every year, are more and more 100 year businesses on high street shedding 20, 30, 50 employees at a time and shutting down for good. And it's like shrug the shoulders and say, aw, very bad. Very bad.

At the very least, at this stage, the likes of Dublin city council, the chambers of commerce and the local businesses should have aggregated together by now, and created some kind of online portal aggregator, with which consumers can interface with. That should have happened by now, if we were actually as small and nimble as we like to believe. A standard 'plug-in' web service, that all stores, new and start-up can use, . . . instead of trying to suffer away in silence, with this each-individual approach, of the little store, the kid with the computer code, and a whole lot of mikey mouse websites all over the place (that no one is really going to be bothered doing any serious trade on).

Where are Enterprise Ireland in all of this? Where is the cash register?