This is an unedited version of my article for Sunday Times August 4, 2013.


Irish political leaders are not exactly known for making logically consistent policy pronouncements. The current budgetary debates are case-in-point. On the one hand, minister after minister from both sides of the coalition benches are repeating ad nausea the tired cliches about their successes in managing the economy. On the other hand, the very same ministers are talking tough about the need for more pain, more adjustments, and more 'reforms' to secure the said recovery and deliver us from the clutches of the Troika. Only to turn around and start praising Troika support as the source of our recovery.

In reality, there are good, if only rarely voiced, reasons for these exhortations: seven hard budgets down, we are not really close to shaking off past legacy of wasteful fiscal practices. The state is still insolvent. The structure of the state policies formation is still dysfunctional. The legacy of pork barrel party politics continues unreformed.

Nothing exemplifies this better than the stalled structural reforms of social welfare and the resulting temporary, risk-loaded nature of much of our fiscal adjustments to-date.


Take a look at the top-line data coming from the Merrion Street.

In the first six months of 2013 tax revenues collected by the Government were EUR3.17 billion ahead of the same period three years ago, while the total voted current expenditure by the Exchequer was up EUR391 million. In other words, the only difference between the current budgetary approach and that practiced by Bertie Ahearn is that today's tax collections are starting from the low levels. Aside from that, current spending continues to ride well ahead of our economy’s capacity to fund it. The 'boom is not getting “boomier”, but the two main current spending lines: social protection and health, are still running at 65.2 percent of the total voted current expenditure, up more than 4 percentage points on 2010.

Things have changed, over the years, to be fair. There have been reductions in current expenditure during the crisis, overshadowed by tax hikes and dramatic cuts to capital spending. Thanks to tax hikes, in H1 2013, Ireland marked the first half-year period when the current spending by the Super-3 Departments: Education and Skills, Health and Social Protection, combined, was below the total tax revenue collected by the State. A significant milestone, but hardly a salvation, as three departments' current expenditure in January-June 2013 still counted for 95 percent of total tax receipts. Thus, even with all the cuts to-date, shutting down all current voted expenditure, excluding the Super-3, will only half our Exchequer deficit from EUR6.59 billion to EUR3.31 billion.

Which exposes once again the five-years-old policy dilemma: to balance the books, Ireland will require at least a EUR2.7 billion worth of further cuts on the spending side on top of what is being planned for 2014-2015. Most, if not all of these will have to come from the Social Protection and Health

Sustainability of savings achieved to-date presents a further risk. So far, cuts to the Exchequer spending that dominated the last five years were heavily concentrated on the sides of capital expenditure and public payrolls. Both are at a risk of reversal in the future.

Any return to growth will require heavier capital investment in public infrastructure, schools, medical equipment and facilities and so on. In other words, capital savings are an illusion on the longer time scale.

Meanwhile, much of the current spending cuts fell onto the shoulders of temporary and contract staff, leaving permanent and more expensive staff protected. This protection came at a cost of increased demands on their productivity. With staff feeling the bite of higher taxes and pensions contributions, while being forced to work more and outside their comfort zone of life-long assignments, public sector unions are already itching to get a new wave of wages increases going.

Back in December 2012, the Troika has pointed out that the savings delivered in public sector pay bills under the Croke Park Agreement cannot be deemed sustainable in the long run. The Haddington Road Agreement for 2013-2016 further confirms this assessment. The insolvent state is now fully committed to more rounds of increments payments, no matter what happens to the economy or exchequer finances. Virtually all ‘savings’ to be delivered under the Haddington Road Agreement are to be automatically reversed at the end of the agreement term or earlier.

The risks of policies reversals on capital and public sector pay, relating to the above measures, are non-trivial. IMF forecasts through 2021 showed the current path of fiscal adjustments taking us to a debt to GDP ratio of just over 95 percent in 2021 from the peak of 2013. Using IMF assumptions, my own estimates suggests that reversing budgetary policies to 2013 levels after 2015 can result in our Government debt to GDP ratio stuck at 108 percent in 2021.


All of which points to a simple but uncomfortable fact: to achieve long-term sustainability of our fiscal policies, Ireland requires a longer term reduction in public spending well in excess of what can be delivered without significantly cutting into current health and social welfare expenditures. Given the fact that health spending is already stretched, the above cuts will have to happen on welfare side.

The reforms, to be undertaken across a period of, say 2015-2016 will have to be sweeping and permanent, building in part on some of the piecemeal changes already in place.

To reduce the risk of replay of the devastating 2008-2010 effects of unemployment shocks on exchequer and economy at large, we need to separate unemployment benefits from other welfare supports.

Unemployment Insurance (UI) should provide a temporary, but generous safety net, sufficient to sustain reasonable family commitments to mortgages and children- and health-related expenditures. Thus, UI should be paid as a percentage of the end-of-employment salary, starting with 2/3rds of the salary up to a maximum of the median wage, with payments declining with duration of unemployment. Payments should terminate after 9 months.

Social welfare payments (SWP) to able-bodied adults can kick in following the expiration of the UI scheme on a means-tested basis. A low monthly personal SWP rate should be supplemented with access to childcare and healthcare, as well as educational grants for children, but only in the cases where recipients engage in training and/or active job searching. A recipient cannot turn down a reasonable offer of a job without facing a financial penalty. All benefits should be subject to a life-time cap of 6-7 years to prevent formation of permanent welfare dependency, while providing a broadly sufficient safety net..

All benefits payments above the monthly personal SWP rate, benchmarked for provision under the scheme, such as health, public services and transport allowance, should be cashless to reduce potential misuse of funds. To encourage better health attitudes and more careful utilisation of public services, a share of unused allowances, say 10-20 percent, accumulated in the account at the end of each year can be paid out as an annual bonus.

We also need to reform our state pensions. Given the fallout from the property bust, large numbers of Irish families are facing the prospect of pension-less retirement. They will require significant state supports - something we cannot afford while carrying the burden of unfunded state pensions.

All statutory state pensions should be means-tested to generate immediate savings and remove absurd subsidisation of the better-off at the expense of those in genuine need. Ditto for age-linked medical cards.

Automatic benchmarking of legacy public sector pensions should end and all current public employees’ pensions should be converted into defined contribution schemes. This will require a legislative decision to alter employment contracts. It will also require recapitalization of the public pensions fund, which can be done gradually over the period of, say, 10 years.

Savings to be targeted in the above measures should apply gradually, over 2014-2017, to generate new substitutes for temporary measures adopted in previous budgets.

However, even with gradual improvements in the labour markets and economy from 2014 on, implementing the above reforms will be nearly impossible. Current political system, with policy decisions based on consensus of the interest groups, is subject to stalling on big reforms and the risk of future reversals by governments seeking popular mandates. This means that we need to take a National Unity approach to structuring and enacting the new legislation dealing with reforms of the social welfare and pensions. Such a consensus is feasible, once all political parties in the Dail realise that Ireland will continue to face subdued economic recovery, elevated unemployment and anemic asset markets well into 2020-2021. With these headwinds, the pressure to carry on with prudent fiscal policies will remain. Thus, the only way of avoiding the contagion from the current long-term economic crisis to the political and state balance of power is to enact irreversible, legislatively protected structural reforms of the social welfare on the basis of bi-partisan legislative engagement. 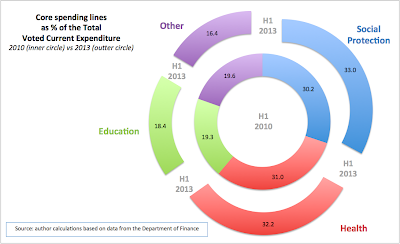 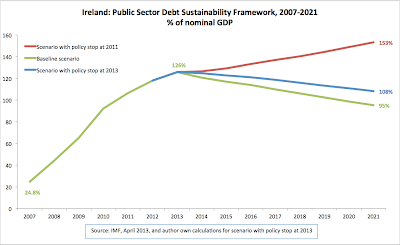 A note from Davy Research on Mortgages Arrears, published this week, represents a good summary of the current crisis and draws some sensible and well-argued policy conclusions on the subject. Alas, the report commits one common, unnecessary and unfortunate error. Strategic non-payment of mortgages debt is cited in the report eighteen times. Yet, there is no direct evidence presented in the report, or in any study cited in the report, as to the true extent of the problem in Ireland. Instead, like all other analysts, Davy team references unsubstantiated statements by the banks and banking authorities, and simplistic extrapolations of other countries’ studies to the case of Ireland as evidence that "mortgage delinquency has continued to grow despite better-than-expected labour market  conditions” and that “strategic default is now a problem." Like other researchers, Davy team cites increases in employment in Q1 2013 as the evidence of a 'growing problem' with strategic non-payments.  Alas, in Q1 2013, seasonally-adjusted full-time employment (jobs that can sustain payment of mortgages) dropped 4,500 year on year. Broader measures of unemployment reported by CSO also posted increases. This hardly constitutes a material improvement on households' ability to fund mortgages repayments and it certainly does not support the thesis of significant and growing strategic defaults. Of course, absence of evidence is not evidence of absence; the employment data cited above does not prove that there are no strategic defaults in Ireland. It simply shows that absent real, direct evidence, one should take care not to fall into the trap of convincing oneself that an oft-repeated conjecture must invariably be true.

Posted by TrueEconomics at 9:22 PM