Latest stats on car sales in Ireland are revealing, especially when indices data is put alongside the actual volumes of cars sales. Recall that in 2013, Irish authorities have changed vehicles registration system and instead of full year, new licenses show first half of 2013 and second half of 2013 vehicles. This was done to appease the dealers' fear that superstition over number '13' on the plate will deter people from buying cars. Obviously, the dealers were not too enlightened to figure out that in the current climate, it is the Vehicles Registration Tax and VAT, charged consecutively (to make certain that double taxation becomes triple taxation) might be a greater deterrent from purchasing a vehicle.

So here are the results of the heroic subsidies and supports accorded to motor trade: 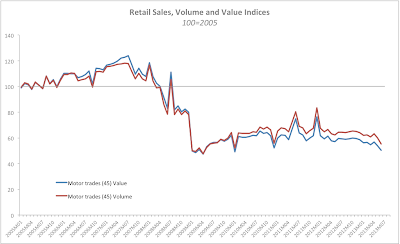 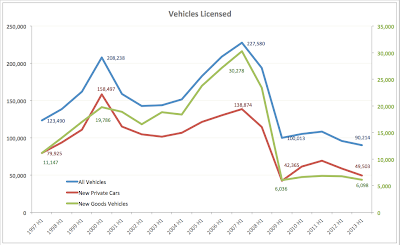 Put simply, there has been no change in the rate of decline in new private cars sales since 2011 H1. Sales of new cars in H1 2012 were falling y/y at the same rate as in H1 2013. Sales of used vehicles are at all-time lows and this means that what we are witnessing the figures is not a license plate year effect, but the effect of overall decline in demand for cars.

Why? Well, handy QNHS survey on the impact of the crisis on households (see more on this here: http://trueeconomics.blogspot.ie/2013/08/182013-anatomy-of-personal-crises-qnhs.html) might offer an insight: 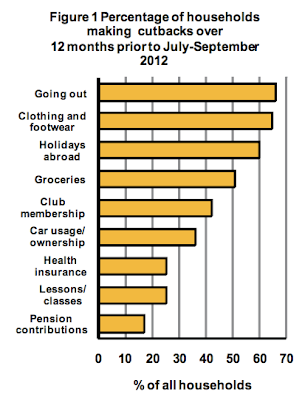