In the previous post I covered July 2013 monthly sales figures for US Mint Gold Coins. As promised, here is a more stable trends analysis using H1 aggregates from 1987 through June 2013.

In terms of average gold volume per coin sold, H1 2013 came it at 0.578 oz/coin, which is relatively moderate, given the historical average of 0.577 oz/coin.

Chart below to illustrate the above: 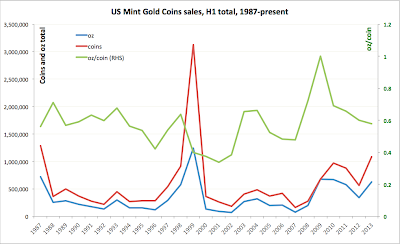 Chart above shows that both coins sales and oz sales of coinage gold remained in H1 2013 on the upward trend established since 2007 and the overall 2009-2013 activity for H1 period remains at post-1999 highs. There is little indication of any serious long-term slowdown in demand for US Mint coins in the data and H1 2013 strengthened the trend away from such moderation. The correction sustained over 2011-2012 has now been more than reversed and H1 2013 numbers in terms of coins sold is sitting comfortably above previous post-1999 maximum attained in 2010.

At the same time, demand for coinage gold (oz sold), while partially correcting upward in H1 2013 remains below the local maxima set in 2009-2010.

The above is consistent with restricted buying-on-the-dip behaviour, with some upward momentum being sustained by considerations other than price movements. This is further supported by changes in correlations between sales and the spot price of gold (average of closing monthly prices in USD):


It is worth noting that H1 2013 figures were driven largely by January )month 1 of Q1) and April (month 1 of Q2) sales. This dynamic did not replicate in July (month 1 of Q3), so we should tread cautiously in expecting robust continuation of the H1 sales in H2.
Posted by TrueEconomics at 9:17 PM