An interesting chart comparing the historical recessions in the UK to the current one: 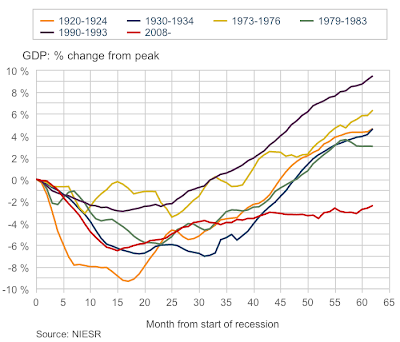 We can (and should) reference Government failures in dealing with the crisis, but we have to keep the simple fact in perspective: by joining the euro area, we have removed virtually all and any power from the hands of our politicians to even attempt to manage the economy. Instead of Dublin, Irish Great Recession can be almost solely blamed on Frankfurt & Brussels (Strasbourg et al can be included too, for completeness). Its causes are rooted in the systemic mispricing of economic and investment risks facilitated, incentivised and even directly driven by the euro and the underlying monetary policy of the ECB. Its regulatory and institutional frameworks were shaped and influenced and informed by the European (Brussels) ethos which put political considerations over political economy, and political economy over economy. Its inability to deal effectively and economically efficiently with the crisis is due to the lack of monetary policy tools, while its fiscal collapse is 50% driven by the social partnership model of the European social democracy, and 50% driven by the severe mismanagement of the banking crisis resolution by the EU/ECB/IMF. This is not to say that Irish society and Governments were not culpable in creating the conditions for the crisis or in failures of managing the crisis. Instead, it is to point to the joint liability that befalls not only us, but also the European systems and leadership.

This should be a reminder to European politicians, especially those claiming to have learned something from the crisis (e.g. http://trueeconomics.blogspot.it/2013/08/982013-political-waffle-passing-for.html)
Posted by TrueEconomics at 1:39 PM

And at present private sector debt seems to be rising again - priming the economy for another technical recession. Mind you, if the ONS had not changed the way they adjust GDP for inflation in 2011 we'd have gone into recession in 2011 and still be in one.

I don't think we're too far away from the yellow 1973-76 line becoming the green 1979-83 line, which would be either morbidly amusing or distorting, depending on how you view it.