Mortgages rears figures are out for Q2 2013 and guess what, things are (predictably) getting worse. I am sure the Government will say that 'getting worse today'='getting better in the future'. As such, we do live in the world where stabilisation = decline in the rate of decline, while a slight uplift on any time series is greeted as an indisputable 'gathering growth momentum'.

What do the numbers of mortgages arrears tell us, spin aside? I highlight main conclusions in bold.

This means that over the year through the end of H1 2013, the number of mortgages accounts rose 0.4% and their outstanding volumes fell 2.41%. Deleveraging is very slow in the economy, given the crisis scope: number of primary mortgages accounts rose 0.7% and their volume shrunk 2.52%, while the number of BTLs fell 1.1% and their volume shrunk 2.01%. In fact, as the chart shows, deleveraging process so far is not helping the workout of arrears: 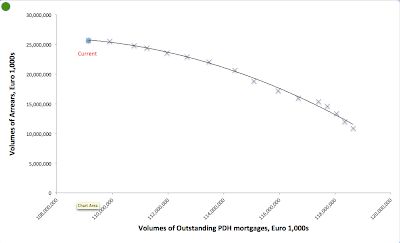 Total number of primary accounts in arrears of any duration is up 11.46% y/y, underlying volume of mortgages represented by these is up 9.1% to EUR25.69 billion from EUR23.55 billion a year ago, while amounts in arrears are up 36.46%, breaching EUR2 billion for the first time. This means that, penalties inclusive, the arrears are now attracting ca EUR202 million in roll up charges annually or about 40% of the annual savings that we need to deliver in Budget 2014 from the social welfare funds. 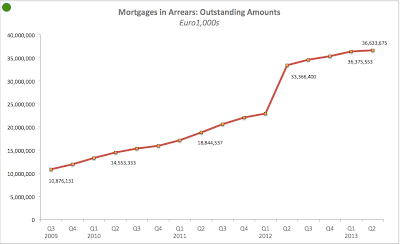 
And some scarier figures for the end: 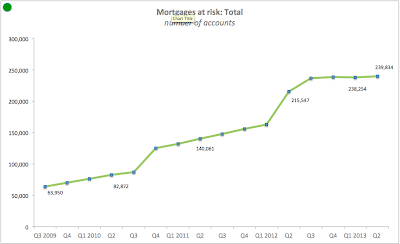 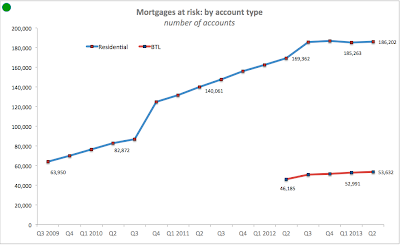 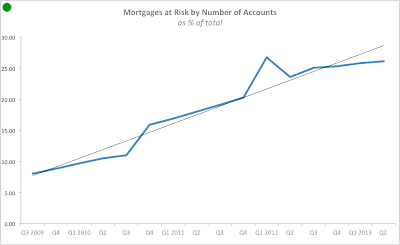 Posted by TrueEconomics at 3:41 PM

``Performance of restructured mortgages somewhat improved, although we do not know as to why this was the case.´´

Can I offer a suggestion on this?

The improvement stems from a mixture of hope ( improved deals combined some media hype about improvements in the property market ) and the slightly increased risk of severe sanction (increased repossessions and talk of such among the chattering classes).

I keep shouting about it but Spain with a similar property boom/bust profile, with the Euro, with 30% of ALL loans tanking and awhopping 26% unemployment ( 50% youth )has just 4% of its mortgages in arrears. Big diferences there include lots of repossessions and variations in how mortgages are treated regarding recourse.