Retails sales stats for July 2013 were released yesterday amidst a torrent of data releases for Ireland this week. With slight delay, here's my take on the core numbers. All referencing seasonally-adjusted data.

Core (ex-Motors) retail sales improved in value in July on seasonally-adjusted based, posting a rise of 2.32% m/m and 1.46% y/y.


Core (ex-Motors) retail sales improved in volume in July on seasonally-adjusted based, posting a rise of 1.31% m/m and the same y/y.

Meanwhile - a reminder - Consumer Confidence, measured by the ESRI has deteriorated m/m by 3.40% and there was a marginal rise of 0.74% y/y.
Couple of charts. First one illustrates three core indicators: 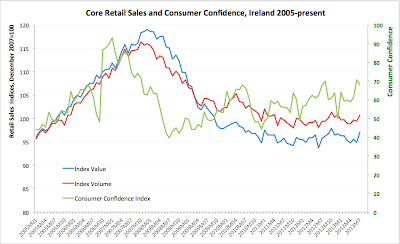 Chart above continues to show generally negative correlation between actual retail sales and Consumer Confidence indicator, as well as the general flat-line trend in the retail sales series for both indices over the last 20-21 months.

Next, relationship between Consumer Confidence and retail sales indices: 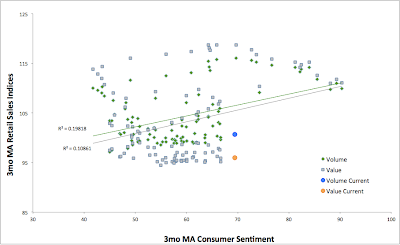 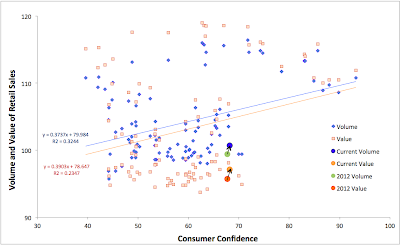 Lastly, my own Retail Sector Activity Index (RSAI) that take into the account dynamics and levels of all three indices: CSO's Retail Sales Indices (Value and Volume) and ESRI's Consumer Confidence index: 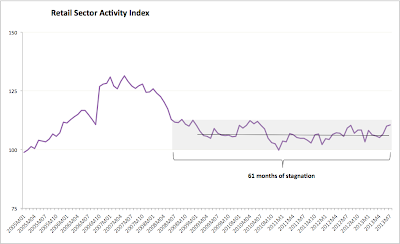 Per above, RSAI continues to run within the broad confines of the flat-trend average, with uptick in July being much flatter than in previous months.

Note: here are correlations between all four measures of retail sector activity health: 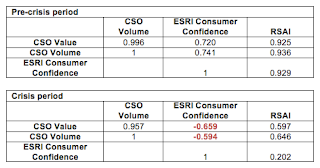 Summary conclusion: things are improving, but the sustainability of improvement is questionable, with 3mo averages divergent from 6mo averages. Consumer Confidence remains largely irrelevant to actual outcomes delivered by the sector. The base of activity remains low and we are now into 5 years-plus of effectively unchanging 'bouncing along the bottom' activity.
Posted by TrueEconomics at 10:21 AM

Just taking one example of a company, that all Irish politicians have blown their trumpets about having 'based' here in Ireland, but does even one person in all the state bureaucracy have any idea what Twitter is about? ? ? ? Or what the founder of that company has been doing, since Twitter? ? ? I doubt that very much. Otherwise we might not see the fatalistic, hand-wringing about loss of retail sector jobs, that seems to follow every latest horror news stories about retail closures in Ireland.

A very, very deep look at how retail and payment systems work now. I.e. Not very well designed by anyone in particular. It just sort of happened. But the payments systems that we now have for small retail, don't fit very well, Jack Dorsey, inventor of Twitter explains in Stanford in Feb 2011.

A more recent look at developments on top of what Dorsey was talking about in 2011, from the Berkeley iSchool recently in 2013.

Before one dismisses a lot of the above, as the work of scientific boffins and engineers, and programmers - it is best to tie it all back, and what Jack Dorsey was trying to describe in the Stanford talk, as the 'experience' - to what real experience designers such as Dick Buchanan from Case Western Reserver Weatherhead school of Management are doing.

This ties into construction and the military also, in north America. A lot of the conversations I have managed to strike up with America construction professionals, who are visiting Dublin in next November 2013, tie back to ideas like those of Paul A. Strassman, who works with the department of defense in America. Very similar ideas though, to what Dorsey and the Twitter people are trying to do with data and 'customers', except Strassman is trying to solve problems for the American military guy sitting in the humvees.

The basic point that this is all getting back to, is that what we have in Ireland maybe (? ? ?), is a disproportionately weighted public sector enterprise orientation, towards bringing in the Twitter's, the DropBox's, Amazon's, Facebook's, Google's, Intel's, IBM's, Hewlett Packard's. . . . but an inability to try to revive parts of the domestic economy. . . such as retail for instance. . . by creating any pilots or test cases, in trying to develop a new form of enterprise that can use those technological infrastructures mentioned above, in order to change how business and trade gets done.

We have the example of Netflix for instance, who comes into Ireland and develops a European wide strategy to break into video-on-demand market, building on top of Amazon's cloud infrastructure in Ireland. So it is not just the primary platform providers that are imported into Ireland, but the secondary application builders, are imported also and are simply 'resident' in Ireland, in some way, but based back in California.