Much-lauded Trump's Nafta 2.0, officially known as the United States – Mexico – Canada Agreement (USMCA) came to being on November 30, 2018. In his State of the Union speech on February 5, 2019, President Donald Trump claimed that the USMCA will replace “the catastrophe known as NAFTA” and “deliver for American workers like they have not had delivered to for a long time.” In a brief summary of the USMCA, Vox (see https://www.vox.com/2018/10/3/17930092/usmca-nafta-trump-trade-deal-explained) has effectively argued that the new Agreement is largely a rehashing of the original Nafta - a step in no new direction, with only minor modifications of the Trump-hated agreement.

Last week, the IMF piped in with its own analysis of the Agreement. The new IMF paper (see: https://www.imf.org/en/Publications/WP/Issues/2019/03/26/NAFTA-to-USMCA-What-is-Gained-46680) provides "an analytical assessment of five key provisions in the new agreement, including:

So how good is the USMCA in driving forward trade and investment flows between the three economies? Per IMF, the "results show that together these provisions would adversely affect trade in the automotive, textiles and apparel sectors, while generating modest aggregate gains in terms of welfare, mostly driven by improved goods market access, with a negligible effect on real GDP. The welfare benefits from USMCA would be greatly enhanced with the elimination of U.S. tariffs on steel and aluminum imports from Canada and Mexico and the elimination of the Canadian and Mexican import surtaxes imposed after the U.S. tariffs were put in place."

So, repealing the problem created by Mr. Trump - steel and aluminum tariffs - has more potential for welfare gains for Mr. Trump's electorate, than the new Nafta agreement that Mr. Trump claims to be one of his Administration's major achievements.

Mr. Trump has referenced, on many occasions, the need for reducing U.S. trade deficits with Mexico and Canada as the core justification for altering Nafta. IMF analysis of the USMCA shows that under the most welfare-enhancing scenario of USMCA introduction, accompanied by normalization of trade in steel and aluminum, U.S. trade deficit with Mexico can be expected to improve by only USD576 million per annum (0.58%), and with Canada by USD 1,781 million (4.31% improvement). However, U.S. trade balance with the rest of the world is expected to worsen by USD 2,698 million (a deterioration of 0.375%), more than offsetting the gains from Canada and Mexico trade.

Worse, U.S. workers will see no material gains from USMCA, as the IMF estimates presented in Table 9 (below) show: 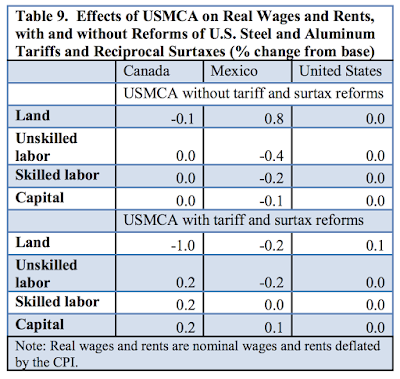 As noted above, IMF projects no material growth boost from USMCA. More detailed analysis - by sector - shows that under the scenario involving repeal of Trump tariffs (the only scenario with positive welfare impact of USMCA), only two non-agricultural sectors of the U.S. economy can expect gains in output: food manufacturing and Other Manufacturing. In contrast, six sectors are likely to see their output decline: 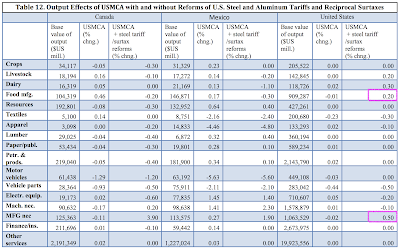 All in, the IMF research shows the extent of economic fudge that is the current Administration's trade and investment policy. The art of the deal seems to be the art of faking soundbites and slogans, while delivering nothing new.

Posted by TrueEconomics at 5:47 AM No comments:


More on increasing concentration risks in the U.S. equity markets: Goldman Sachs estimates that almost 1/4 of total return to S&P500 over the last 10 years came from just 10 stocks: 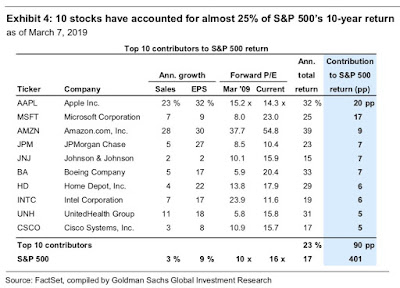 Posted by TrueEconomics at 5:28 PM No comments:


It has been an ugly decade for Ireland's building and construction industry. especially for housing. Following a historically massive bust in 2009-2012, indices of total production in the housing sub-sector fell from the pre-crisis high of 751.7 for value and 820 for volume, attained in 2006, to their lowest cyclical points of 57.9 and 59.5, respectively, in 2012. In other words, from 2006 through 2012, Irish residential building and construction production fell a massive, gargantuan, non-Solar-System-like 92.3% in value terms and 92.74% in volume terms. That was bad.

The recovery has not been any better. Since the lowest point of the cycle in 2012, through 2018, based on the latest figures from CSO, value of production in residential construction sector rose to 186.6, an uplift of 222.3% and volume rose to 176.9 (a rise of 197.3%). Still, compared to pre-crisis peak, current value of production in Ireland's residential building and construction sub-sector is down 75.2%, still, and in volume terms it is down 78.4%. 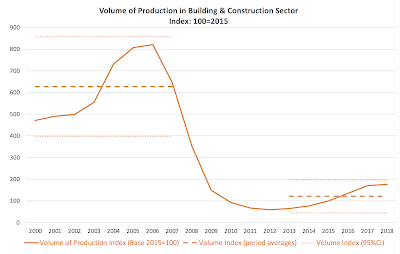 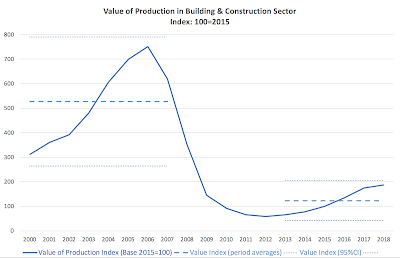 Of course, comparatives to the peak production year would be subject to criticism that things should be benchmarked by something 'other' than the levels of activity achieved during the bubble. I disagree. Back in the days of the bubble, Ireland experienced rampant house price inflation, as demand was still lagging behind supply. But, let me entertain, as in the above chart, an argument about averages over two periods: the period of the pre-bust activity and the period of the recovery activity.

Ireland today has an acute crisis in the supply of homes. There is no question about that. What 2018 figure shows, however, is far worse. In 2018, value of production in residential construction sector in Ireland grew by only 6.88% y/y - the slowest pace of growth since the recovery started in 2013. By volume, activity grew only 3.75% y/y in 2018 - also the slowest pace for the recovery period. As the crisis in supply of homes get worse, the rates of growth in the 'recovering' sector get shallower. This suggests that Irish residential construction is nowhere near the trajectory needed to achieve the rates of growth required to fill the gap in the housing supply.

In all 12 years of positive growth (between 2000 and 2018), last year marked the worst rate of growth in Value and the second worst year of growth in Volume terms. To put things into perspective: under 2018 growth rates, Irish residential building and construction production won't reach its 2000-2007 average levels until mid-2033 in value terms and mid-2052 in volume terms.

Posted by TrueEconomics at 11:04 PM No comments:


As raging buybacks of shares and M&As have dropped the free float available in the markets over the recent years, Earnings per Share (EPS) continued to tank. Yet, S&P 500 valuations kept climbing: 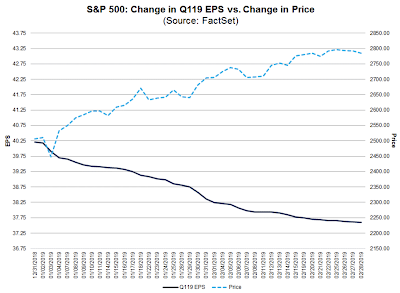 The disconnect between investors' valuations and risk pricing, and the reality of tangible estimations for current conditions is getting progressively worse. The markets remain a spring, loaded with the deadweight of expectations sand castles.

Posted by TrueEconomics at 5:31 PM No comments: 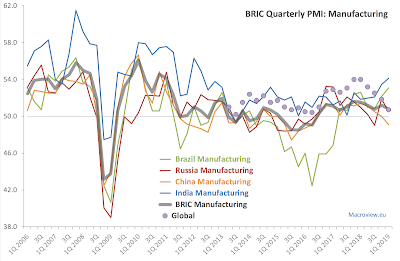 All in, Manufacturing sector leading indicator suggests a major slowdown in the Global growth momentum, and some spillover of this slowdown to Russia and China.  Brazil's robust reading so far marks the fastest pace of expansion since 1Q 2010, on foot of a recovery from a very long and painful recession. India's reading is the highest since 2Q 2012. If confirmed over March and over Services PMI, this implies a major diversion of growth momentum within the BRIC group.

Posted by TrueEconomics at 11:47 PM No comments: 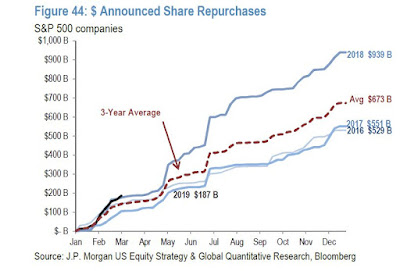 Posted by TrueEconomics at 5:27 PM No comments:


Chill-ax everyone… #ISM is not even close to signalling a serious trouble ahead… Not that it is a measure I would even consider for troubleshooting.
— Constantin Gurdgiev (@GTCost) March 1, 2019

Posted by TrueEconomics at 5:28 PM No comments:


Australia - a country with the biggest property bubble of all times and of all countries - is retracing the exact mis-governance steps as its predecessor claimant of the title, Ireland. Just as in Ireland pre-2008 bust, Australian central and regional Government figures are adding to the hype of 'real estate investment', whipping up households' enthusiasm for property spending, just as the market is starting to crate: 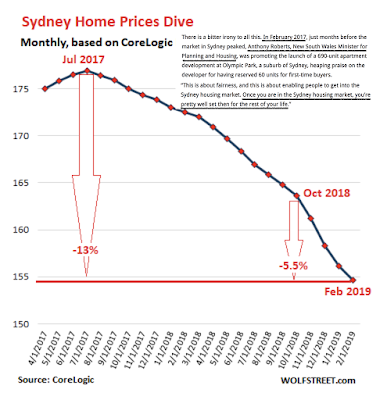 While Australian property investors should be heading for the hills, Australian voters should consider actively advocating that the country (regional, etc) Government should adopt a more responsible approach to managing the risks of a massive bubble collapse. One suggestion - suitable not only to Australia, but to all economies around the world - would be to force politicians to be legally liable for what amounts to selling pitches and investment advice they so eagerly dish out.

How about a new way of thinking about accountability in politics? Your politician says 'A' and 'B' happens, you charge your politician for any damages that their call to action on the claim 'A' has produced. At least with such a system of 'incentives' in place, we might see politicians taking some time to reflect on the opportunistic garbage they push into public domain before speaking.

Posted by TrueEconomics at 2:24 PM No comments: