In the previous WLASze post, I promised to cover in more detail the Future Generation Art Prize 2013 at Venice Biennale. Here are some links and this year's artists.

The newsletter covering applicants and participants is here,  and you can explore all of the artists exhibited in Venice here.

An architectural/spatial geometric installation with fractal-like dynamic repetition of the subsets is somewhat clinical in nature, yet, the size and span of it do impress, as well as superbly un-natural and inorganic reduction in size... 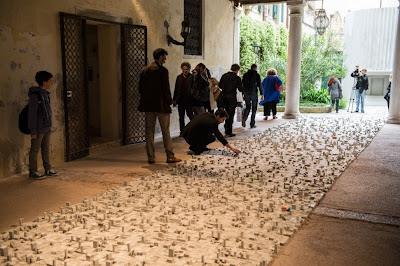 
Lynette Yiadom-Boakye is a well-recognised painter and her work deserves some series consideration: "Underlife" illustrates 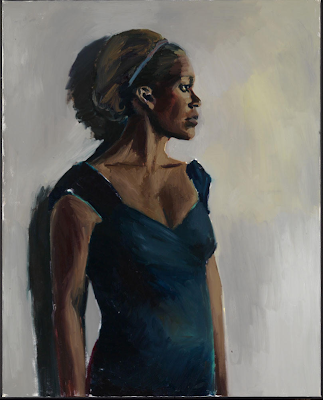 Although not all of it is of consistent quality (I guess this is why she is still in the 'future generation' league), as "The Edifying Oracle's Cheque, 2012 shows: 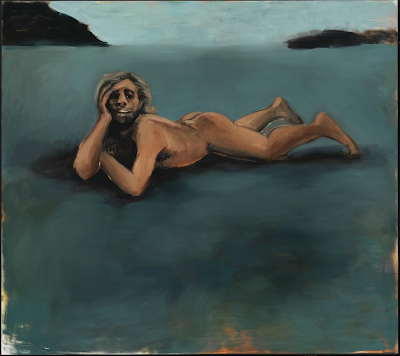 Incomplete work both compositionally and figuratively.


Jonathas de Andrade from Brazil "Nostalgia, a Class Sentiment" is an installation that merges the lego-like figurative formalism (not quite an abstraction) with text-based contextualisation. The result is rather poor attempt at making cataloguing fun... 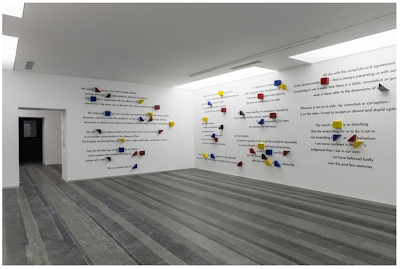 I am not a fan of this stuff... It is neither nostalgic (being deprived of emotional content) nor sentimental (being deprived of emotive form). It might be relevant to 'class' as it speaks directly to the academists... Why on Earth would I care to put this here? Precisely because someone, somewhere on this plant thought this is a potential for the Future in art... right...


Neither am I a fan of post-Rauschenbergian collections of refuse as installation art. Rauschenberg was an indisputable master of assemblage: http://www.rauschenbergfoundation.org/ and since his works, the approach of amassing discarded objects into some sort of meaning has become a very-hard-to-execute form of art. Abigail DeVille's "Nostalgia, a Class Sentiment" just doesn't cut it: 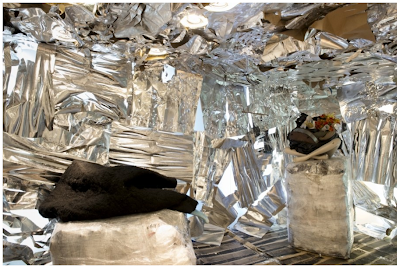 According to curators, DeVille "creates archaeological constructs full of cultural and historical references. Her dark sculptural installations steeped in “destruction” and “decay” are a reflection on social repression, racial identity and discrimination in the ruinous decadence of the big city. With building waste and rubbish from the streets, which she incorporates as found objects and “intergenerational debris”, DeVille builds black holes and vortexes like metaphorical time warps. In the periphery of this constructed decay, or once through the vortex, we meet lost individuals, grotesque parodies of how blacks were perceived in the American past." 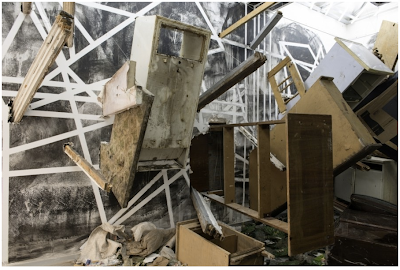 Sorry, folks, but Oldenburg was cool. DeVille missed the point: there is no need to 're-narrate the 1960s'. This isn't Hollywood, where routine running out of plots to produce movies on results in re-narration of old classics. Oldenburg's links: http://www.moma.org/collection/artist.php?artist_id=4397 and http://www.tate.org.uk/art/artists/claes-oldenburg-1713 and http://www.guggenheim.org/new-york/collections/collection-online/artists/bios/689 and so forth... I just don't dig this 'connection' to De Ville - except at the most superficial...

Between - assemblage, cataloguing and objects-based installations are best exemplified by the master of the art: Ilya Kabakov (http://www.tumblr.com/tagged/ilya-kabakov). Eat your "vortex representing ...life ... based on... found object environment", DeVille: 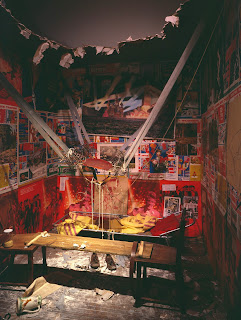 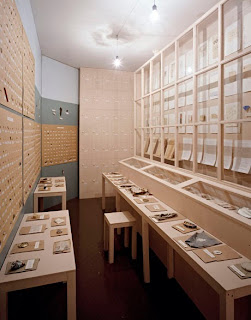 Enough of stuff I don't like, here's some that actually looks good.

Mykyta Kadan from Ukraine has a classical education in art and this shows - in contrast to the majority of Western artists who often have only scant command of composition and practical experience in 'crafting' their works. Ideas are fine and necessary, but remember - art, like poetry, maths, philosophy etc is more than just ideas. it is also about execution. 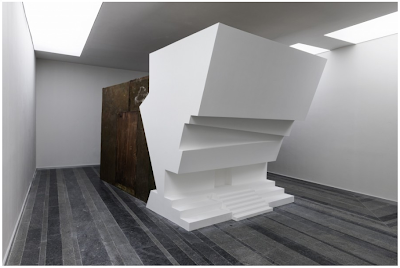 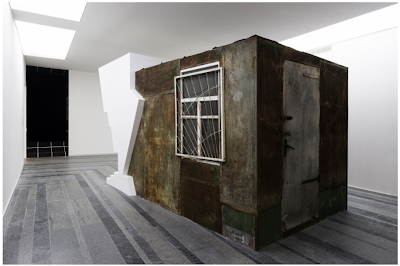 "Kadan combines intellectual reflection with continuous social engagement, using his artistic practice to act in the socio-political discussions in Ukraine. With a strong historical awareness, Kadan focuses his research on the urban transition of Kyiv, a city in continuous transformation losing its historical roots and its public spaces to commercialism. Kadan works mostly in painting and sculpture, and in his use of abstraction and modelling he references the Russian avant-garde movements from the turn of the 20th century." Can't agree more. Fantastic dynamism, merged organically with pure statism, accentuated by the intensity of colours.

Posted by TrueEconomics at 7:41 PM