Latest data for Merchandise trade for June 2013 allows us to make some comparatives for the first half of the year. Here are some stats, all covering only merchandise trade:


Charts below illustrate the trends: 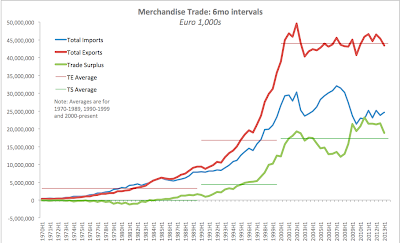 Not-too-good news is, exports are now in the negative territory in terms of y/y changes. Remember, we need positive growth in total (merchandise and services) exports of ca 5% per annum to maintain any semblance of sustainability. Here's the tricky bit: 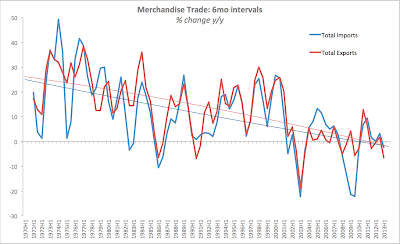 As chart above shows, we really need rapid, very rapid growth in services exports to return our total exports and trade balance to where we need them to be to maintain economic activity at the levels that will be consistent with long-term gradual reduction of public debt.  Over the last 5 years, merchandise exports in Ireland grew on average at 0.59% y/y and over the last 10 years this growth was 0.94%. Owing to the recent collapse in our imports, our trade balance grew on average at 11.73% in the last 5 years. However, over the last 10 years the growth in our trade balance was much less dramatic 3.18%.
Posted by TrueEconomics at 2:57 PM