CSO recently released Balance of Payments stats for Q1 2013 - you can read the main headlines and see underlying data here.

Current account data is of more interest from my point of view. And it shows some changes both at a trend and at shorter-term levels, as well as the extremes of skewness in Irish economic activity in favour of the MNCs-dominated Financial and ICT services.

Let's run through the credit side (exports from Ireland) of the CA first. 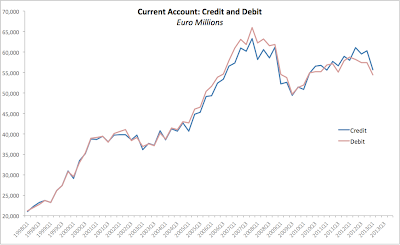 Breakdown between goods and services exports: 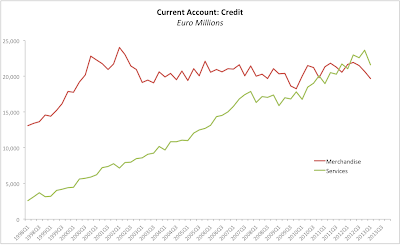 On trends side: chart above shows worrying shorter-term changes downward in merchandise credit, from a gently up-sloping trend established in and contraction in Q4 2009, and a sharp short-term decline on robustly upward trend in services.

Breakdown in the core MNCs-driven services credits is in the following chart: 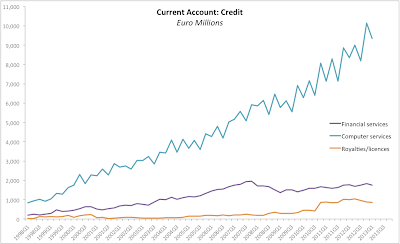 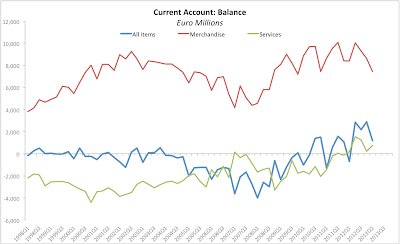 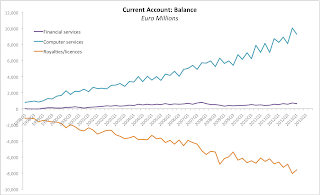 The chart above underpins the extremely skewed distribution of source of the current account balance. Taking three sources of the balance attributable to MNCs-driven trade in services: Financial Services, Computer Services, net of Royalties and licenses payments, the three sources of balance accounted for 21.5% of all credits recorded on the credit side of the Current Account, but 190% of the total balance. In other words, even when we factor out net outflows of funds to cover licenses and royalties, the resulting balance on two sub-sectors of ICT and financial services stood at EUR2.271 billion which is almost double the total current account surplus of EUR1.197billion recorded across the entire economy.

Posted by TrueEconomics at 1:50 PM