This is the second post of my WLASze: Weekend Links on Arts, Sciences and zero economics.

The first post is linked here and is referenced below. Enjoy!


I covered superb Irish Pavilion at the Venice Biennale 2013 in my previous post. Now on to one of the best artists exhibiting this year in Venice: Catalan artist Antoni Tàpies, who, sadly passed away just last year, are in the Palazzo Fortuny. Tàpies's canvases of earth, dust, structurally rich and textured paint, and deep in colour and subdued light convey forms in their own space, free of time, interference of artist's positioning, referencing, blinding internal and external fields of view.

You can explore his work - outside Biennale - here. Tate has some excellent Tapies in collection here.
Here's one from Tate selection: 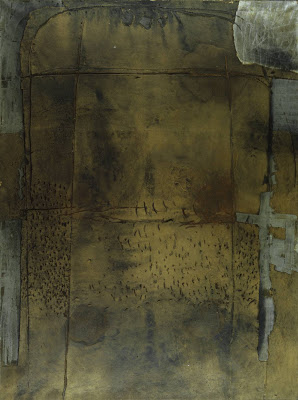 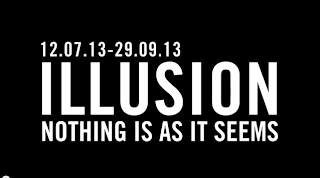 I am just back from there… and kids and MrsG loved the show and the MakersFair in front of the Physics building...

By far the most impressive piece for Luca was: 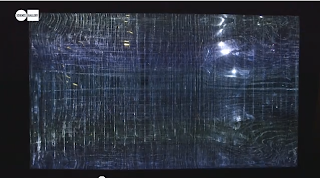 Yet there are other fantastic works and projects there.


Amazing work of Portuguese artist, Henrique Oliveira in Paris. Dynamic, fluid, yet forceful. Integrated into space yet perfectly disruptive to that space…
Here is the artist website (warning - slow loading). Very good overview across three media - a rare combination for any artist. 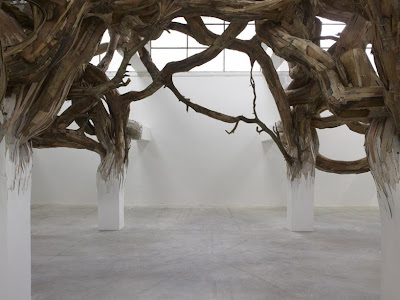 Amazingly, http://www.theartnewspaper.ru/ let their domain lapse! Seriously poor judgement by the AN.


Cool stuff on 'superfluids': Behavior of Turbulent Flow of Superfluids Is Opposite That of Ordinary Fluids

Via http://www.sciencedaily.com/releases/2013/07/130725152143.htm example: liquid helium. "When cooled to extremely low temperatures, helium exhibits behavior that is otherwise impossible in ordinary fluids. For instance, the superfluid can squeeze through pores as small as a molecule, and climb up and over the walls of a glass. It can even remain in motion years after a centrifuge containing it has stopped spinning. Now physicists at MIT have come up with a method to mathematically describe the behavior of superfluids -- in particular, the turbulent flows within superfluids."

More scientifically, from the authors' mouth: "Superfluid turbulence is a fascinating phenomenon for which a satisfactory theoretical framework is lacking. Holographic duality provides a systematic approach to studying such quantum turbulence by mapping the dynamics of a strongly interacting quantum liquid into the dynamics of classical gravity. We use this gravitational description to numerically construct turbulent flows in a holographic superfluid in two spatial dimensions. We find that the superfluid kinetic energy spectrum obeys the Kolmogorov Formula scaling law, with energy injected at long wavelengths undergoing a direct cascade to short wavelengths where dissipation by vortex annihilation and vortex drag becomes efficient. This dissipation has a simple gravitational interpretation as energy flux across a black hole event horizon." [Few of you who took my derivatives theory few years back would recall, undoubtedly, Kolmogorov scaling in non-normality space...] 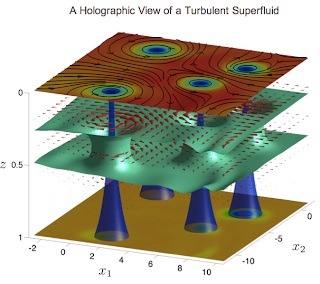 And in uber-geeeky terms via MIT: "Holographic description of a superfluid with vortices. The vertical axis is the radial direction z of AdS4. The planes at z=0 and z=1 are the boundary of AdS4 and the black hole horizon respectively.  The green surface is a surface of constant bulk charge density, with the region between the two slices defining a ``slab'' of condensate where most bulk charges reside.  The slab screens excitations from falling into the horizon. This can be seen from the vector field in the plot which indicates the direction and magnitude of the local energy flux;  note that this flux vanishes quickly below the slab. The vortices, with energy flux circulating around them, punch holes through this screening slab, providing avenues for excitations to fall into the black hole.  The surface z = 0 also shows the condensate on the boundary (with blue color representing zero condensate), superposed with flow lines of the superfluid velocity. The flux tubes show a surface of constant  |\Phi|^2/z^4, which coincides with the boundary condensate at z=0. The z = 1 surface also shows the flux of energy through the horizon.  Note that the energy flux is only significant (red and green) in the wake of the moving vortices."


While on the impossible science set, reading through some links, I stumbled upon the ages-old Godel's Ontological proof of the existence of God. Here's the brilliant exposition. And more links on this fascinating effort:


This is why I absolutely love Godel's work. He was, beyond any doubt, one of the greatest thinkers of the 20th century. Godel's greatest contribution was in the form of two Incompleteness Theorems. Am paraphrasing these here:


Theorem 1 is equivalent to the Liar’s Paradox: "Everything I say is a lie" or "This sentence is false". See: http://www.iep.utm.edu/par-liar/. Theorem 2 is equivalent to saying that "No proof can be proof of itself".  Godel's Theorem 2 is, in my view, a more defined logical version of Karl Popper's idea that any theoretical (mathematical) system based on axiomatic (or hypothesis-anchored) structure is falsifiable, but unprovable. Godel actually pre-dates Popper's thesis. Incidentally, this is why, in my view, axiomatic (theoretical) structures of inquiry are more powerful (have greater degrees of freedom) than 'natural' sciences. And hence, arts are more powerful than physical (experimental) sciences. 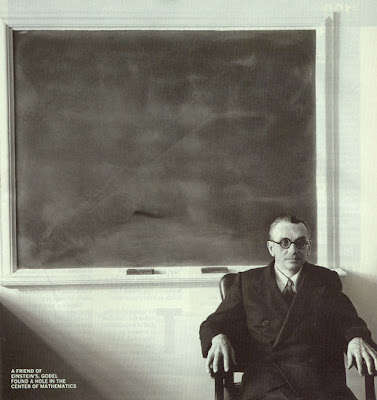 
And time to see the awesome power of nature. Courtesy of My Modern Met blogs:
http://www.mymodernmet.com/profiles/blogs/veselin-malinov-porto-portugal-hurricane-storm 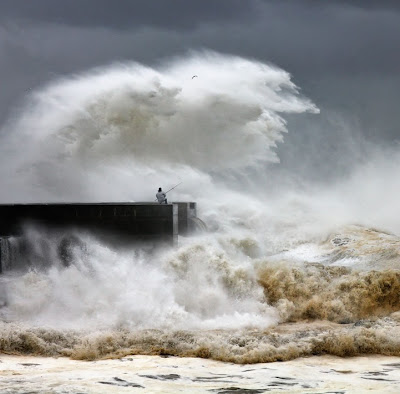 The extreme and the extremely beautiful power of nature merged with the power of art. Veselin Malinov's work is fantastic. See it here. His other works are also superb, even if less dynamic. By the way - both, the exceptionally movement-saturated photographs of the storm and 'static' images of architectural spaces reveal Malinov's real strength: intuitive composition. 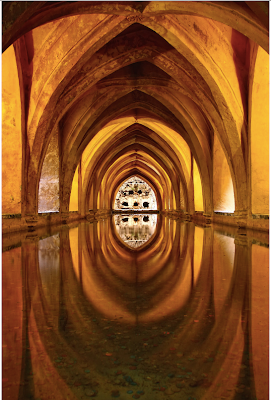 Compare this with the banality of architectural photography of Peter Marlow, I covered in the first post (linked above).

Enjoy!
Posted by TrueEconomics at 6:28 PM

Theorem 1: In any logical system it is possible to construct statements that are simultaneously neither true nor false.

Is it not better to say

....In any logical system it is possible to construct statements that are neither 'PROVABLY' true or 'PROVABLY' false.

In any Formal axiomatic system created by man there will always be unproveable statements unless you add more information (Chaitin)which then just expands the math to encompass new unproveable statements.
As the problem you refer to is one of self reference .."Everything I say is a lie"
then logically the only entity that can self check itself completely is 'God' or where I think Chaitin might state that for God nothing is random.