This is an unedited version of my Sunday Times article from June 23, 2013


As G8 summits go, the latest one turned out to be as predictable as its predecessors – an event full of reaffirmations of well-known conflicts and pre-announced news. In terms of the former, the Lough Erne meeting delivered some fireworks on Syria. On the latter, there was a re-announcement of the previously widely publicized Free Trade pact between the US and Europe. Another pre-announced item involved the EU, UK and US push for corporate tax reforms.

The two economic themes of the Logh Erne Summit agenda are tied at the hip in the case of our small open economy heavily reliant on FDI attracted here by the opportunities for tax arbitrage. As such, the G8 meeting agreement poses a significant threat for Ireland's model of economic development. Although it will take five to ten years for the shock waves to be felt in Dublin, make no mistake, the winds of uncomfortable change are rising.


The trade agreement, first announced by the Taoiseach months before the G8 summit, promises to deliver some EUR120 billion in net benefits for the EU economy. Roughly 90% of these are expected to go to the Big 5 economies of the EU, leaving little for the smaller economies to compete over. Behind these net gains there are also some regional re-allocations of trade that will take place within the EU itself.

In the short term, Ireland is well-positioned to see an increase in exports by the US multinationals operating from here and to some domestic exporters. The uplift in trade flows between Europe and the US may even help attracting new, smaller and more opportunistic US firms' investments. While tens of billions in trade for Ireland, bandied around by various Irish ministers, are unlikely to materialize, a small boost will probably take place.

However, over time, the impact of the EU-US trade and investment liberalisation can lead to sizeable reductions in MNCs activity here. Under the free trade arrangements, longer-term investment and production decisions will be based on such factors as cost considerations, as well as concerns relating to access to the global markets, and taxes.


Consider these three drivers for future trade and economic activity in Ireland in the context of the G8 summit and other recent news.

On the cost competitiveness side, we have had some gains in terms of official metrics of labour productivity and unit labour costs. Major share of these gains came from destruction of less productive jobs in construction and domestic services. Increase in revenues transferred via Ireland by some services exporters since 2004-2007 period further contributed to improved competitiveness figures.

Once when we control for these temporary or tax-linked 'gains' Ireland is still a high cost destination for investors compared to the majority of our peers.  As reflected in Purchasing Managers Indices, since the beginning of the crisis, Irish producers of goods and services have faced rampant cost inflation when it comes to prices of inputs. Earnings and wages data for 2009-2012, released this week, show labour costs rising across the exports-oriented sectors. Lack of new capital, R&D and technological investments further underlines the fact that much of our productivity gains are related to jobs destruction and transfer pricing by the MNCs.

When the tariffs and other barriers to EU-US trade come down, some multinationals trading into Europe will have fewer incentives to locate their production in Ireland. This effect is likely to be felt stronger for those MNCs which trade increasingly outside the EU, focusing more on growth opportunities around the world. Based on experiences with other free trade areas, such as NAFTA and the EU, this can lead to increased on-shoring of FDI back into the US and into core European states, away from smaller economies that pre-trade liberalization acted as entrepots to Europe.


The tax dimension of the G8 agreement will be the most significant driver for change in years to come.

The G8 clearly outlined the reasons for urgency in dealing with the issues of both tax evasion (something that does not apply in Ireland's case) and tax avoidance (something that does have a direct impact on us). These are structural and will not dissipate even when the G8 economies recover.

All of the G8 economies are struggling with heavy public and private debt loads and/or high domestic taxation levels. All are stuck in a demographic, social security and pensions costs whirlpools pulling them into structural insolvency. In other words, not a single G8 nation can afford to lose corporate revenues to various tax havens.

In line with the longer-term nature of the drivers for tax reforms, G8-proposed agenda can also be seen in the context of quick, easier to implement changes and longer-term structural realignment of tax systems.

The first wave of tax reforms outlined in principle by the G8 Summit will focus on tightening some of the more egregious loopholes, usually involving officially recognised tax havens. On the European side, this will spell trouble for the likes of Gurnsey and Jersey. The first round will also target easy-to-spot idiosyncratic tax arrangements, such as the Double Irish scheme and similar structures in Holland. Shutting down Double Irish will impact around a quarter of our trade in services, or roughly EUR13-15 billion worth of exports – much more than the EU-US Free Trade Agreement promises to unlock. The cut can be quick, as much of this trade involves electronic transactions - easy to shift and costless to re-domicile.

Over time, as changes in tax systems bite deeper into the structure of European tax regimes, losses of exports and FDI are likely to mount. To raise substantive new tax revenues, the EU members of G8 will have to severely cut back tax advantages accorded to countries like Ireland by their competitive tax rates.

Free Trade zones are notorious for amplifying the role of comparative advantage in determining where companies choose to domicile. Thus, to achieve a level the playing field for trade-related investments within the EU, either the effective tax rates will have to be brought much closer to parity across the block, or the basis for taxation must be redistributed more evenly across producers and consumers of goods and services.

Forcing all EU countries to harmonise the rates of tax would be politically difficult. Instead, there is a ready-to-use solution to the problem of redistributing tax revenues available since 2009 - the Common Consolidated Corporate Tax Base (CCCTB).

Under this mechanism companies selling goods and services from Ireland into European markets will report separate profits by each country of sales. These profits will then be reassigned back to the countries where each company has operations on the basis of a complex formula taking into the account company sales, employment levels and capital structure on the ground. The re-allocated profits will then be subject to a national tax rate. The end game from the CCCTB for Ireland will be effective end to the transfer pricing that goes along with the current system.

The EU Commission analysis claimed that with full cooperation, the enhanced CCCTB implementation will lead to an 8% rise in tax revenues across the EU. The main beneficiaries of these gains will be the Big 5 member states. The total net impact of CCCTB on all EU member states is expected to be nearly zero.

This suggests some sizeable reallocations of economic activity and tax revenues away from the smaller member states, like Ireland, in favour of the larger member states. January 2011, study by Ernst & Young for the Department of Finance concluded that Ireland can sustain one of the largest drops in tax revenues in the euro area due to CCCTB implementation. The estimates range up to 5.7% Government revenue decline, with our effective corporate tax rate rising to 23%, GDP falling by 1.6%-1.8%, and employment declining by 1.5%-1.6%.

The Ernst & Young report was compiled based using data for 2005. Since then, Irish economy's reliance on services exports grew from EUR 49.5 billion or under 31% of GDP to EUR90.7 billion or close to 56% of GDP. With services exports being a prime example of a tax-sensitive sector in the economy, we can safely assume that the above estimates of the adverse impact of CCCTB on Irish economy are conservative.

The CCCTB matches nearly perfectly the G8 Action plans relating to the issues of tax avoidance. It also fits the objectives of the OECD plan on addressing taxation base erosion and profit shifting which the OECD is preparing for the Finance Ministers and Central Bank Governors of the G20 in July.

While much of the impact of this week's G8 summit remains the matter for the future, there is no doubt that the G8 push toward curtailing aggressively competitive tax regimes is real.  In my view, Ireland has, approximately between five and ten years before our competitive advantage is severely eroded by the EU and the US efforts to coordinate the effective rates of taxation and consolidate reporting and payment bases for corporate profits. We must use these years wisely to build up our technological capabilities and develop a skills-based high-value added and highly competitive economy. 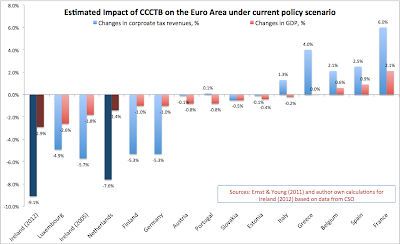 The latest data on the duration of working life (a measure of the number of years a person aged 15 is expected to be active in the labour market over their lifetime) shows that in 2000-2002, on average, European workers spent 32.9 years in employment or searching for jobs. This number rose to 34.7 years by 2011. In Ireland, the same increase in duration of working life took Irish workers from spending on average 33.3 years in labour market activities in 2000-2002 to 34.0 years in 2011. The increase in years worked in the case of Ireland was the third lowest in the euro area. In 2011, duration of working life ranged between 39.1 and 44.4 years in the Nordic countries and Switzerland – countries with much more sustainable pensions costs paths than Ireland. The significance of this is that given our pensions, housing and investment crises, Irish workers can look forward to spending some four-to-five years more working to fund their future retirement. Aside from a dramatic greying of our working population this means that even after the economic recovery takes hold, there might be no jobs for today's younger unemployed, as the older generations hold onto their careers for longer.

Posted by TrueEconomics at 3:56 PM