This is an unedited version of my Sunday Times article from July 7, 2013.

In coming weeks, the Irish authorities are planning to complete the general policy reforms comprising the Personal Insolvency Act 2012, the Mortgage Arrears Resolution Targets (MART), Guidelines on a Reasonable Standard of Living and Expenses, the Review of Code of Conduct on Mortgage Arrears, and the Land and Conveyancing Law Reform Bill.

All of the above documents define the core objective of the reforms as delivering long-term sustainable solutions to mortgages crisis. None, save for the Central Bank’s MART, bother to explicitly define what constitutes such sustainability. Sadly, the Central Bank existent definition is both vague and, arguably, counterproductive in terms of its potential impact on the economy and society at large. As such, it is in need of urgent clarification and amendments.

MART states that " the Central Bank will assess the success of the institution’s progress by sampling cases and gauging the plausibility of their sustainability, including through the use of quantitative tools".

The Central Bank is currently in the process of defining what these sustainability assessment tools will be and what methodology will underpin these.  The public is unlikely to see these in full detail. This week, Seanad reading of the Central Bank Supervision and Enforcement Bill 2011 showed clearly that the Irish authorities are also unwilling to grant the Central Bank sufficient powers to robustly curb potentially anticompetitive and consumer-damaging actions of the banks.

All of this does not bode well for the prospect of effectively resolving the longer-term social and economic crises related to the household debt overhang.


MART sets out three fundamental principles that must be respected with regard to sustainability. These include consideration of both current and prospective debt servicing capacity of the borrower; the "need to use an appropriate interest rate when discounting future income flows, which should take account of the lender’s cost of funds”, and the requirement for the lenders to apply "a realistic valuation of the borrower's assets" and costs of foreclosure on the loan.

As such, the existent concept of sustainability substantively contradicts the economic and social considerations of long-term household debt sustainability.

The Guidelines on a Reasonable Standard of Living and Expenses form the cornerstone of the test for what can be recovered by the banks from defaulting households. Yet, the Guidelines do not allow for households accumulation of pension savings and savings that can be used to cushion against any potential future adverse shocks to household employment, earnings, health or other unforeseen risks, such as an old-age parent dependency. As the result of this, a sustainable mortgage arrangement can easily become unsustainable overnight at any point in time following the original restructuring.

Worse than that, the risks to future sustainability are actually higher the greater is the extent of the original distress. This so, because current mortgages problems are linked to future risks of unemployment, poorer health and lower pensions provisions. The draconian insolvency and debt restructuring regimes promoted by the Government further compound these risks.

Economists know that a household experiencing unemployment are more vulnerable to higher risk of unemployment in the future. The duration of the original unemployment spell is also a contributing factor.

Households that experience mortgages distress are also more vulnerable to adverse long-term health effects. The long-term health risks arise from the current stress, as well as from the lower lifetime disposable income available to the distressed mortgagees. These two risk factors, in turn, are reinforced by the fact that in Ireland, preventative health is an out-of-pocket expense. This means that economically distressed households tend to cut back on preventative health expenditures early on in the crisis.  Having entered into the Guidelines-determined payments arrangements with the banks, these households will have no future funding for either preventative health or insurance cover that facilitate prevention, early detection and treatment of chronic and disability-related illnesses.

Households at higher risk of unemployment also face exponentially higher risk of completing their work-lives without adequately providing for pensions, even in the absence of mortgages debt problems. Those that are forced to go through a debt restructuring processes are more likely to enter their retirement in poorer financial health. Which, in turn, implies that their pensions expenditures funding shortfall will be higher in the future than the gap which will befall their age cohort counterparts.

The endgame for the households experiencing financial difficulties today and facing a ‘sustainable’ mortgages restructuring can be high risk of old age poverty and low quality of old-age health.


The second point about the MART definition of sustainability is that it ignores the margins between the cost of borrowing for the households and the cost of funding these loans for the banks. This difference is non-trivial. The Central Bank criteria for sustainability require that a restructured mortgage should be at least self-funding for the bank. Currently, average new adjustable rate mortgage is priced at around 3.45 percent or ca 0.7 percent above the lowest cost of funding currently available via a bond placement. As the Pillar banks are moving toward the Government-set 2014 deadline for switching to independent funding, both margins and the funding costs for the banks are likely to rise.

Over 2003-present, average new business retail interest rates on adjustable rate mortgages peaked at 5.62%. Yet, during the period when the new business rates were at their highest, banks margins were actually relatively low. If the margins increase, as envisioned by the Central Bank-own policies on reforming the Irish banking sector, convergence of wholesale funding costs to historical averages will imply that the retail rates faced by the households can jump above 7 percent. MART definition of sustainability will account for only about 60 percent of this increase, with 40 percent left outside the official long-term sustainability consideration.

The third core component of sustainability definition under MART also requires significant re-thinking. The banks have no incentives, under the reformed personal insolvency regime to consider longer-term implications of household asset valuations and costs of foreclosure.

Taking all mortgages that are either in arrears, restructured and in banks possession, 238,254 mortgages accounts amounting to the total of EUR46.21 billion were at risk of default or defaulting in Q1 2013. While the number of accounts in distress was down 0.17 percent quarter-on-quarter in Q1 2013, the volume of lending these accounts represent rose 2.27 percent. The rate of increase in Q1 2013 was three times faster than in Q4 2012.

Some percentage of the non-performing mortgages is undoubtedly represented by the accounts that are in strategic arrears - the case brought to the forefront of the news-flow this week by the Ulster Bank statement on the matter. However, what is not in doubt is that overall, the quality of the outstanding mortgages pool in Ireland is deteriorating. This is happening at the time when the property prices are continuing to fall, especially in the areas and regions where mortgages distress and quality of mortgages loans are most likely the lowest – outside the core urban locations. With this, the costs associated with future foreclosures are rising as well.

Some anecdotal evidence and reports by the insolvency support organisations indicate that the banks are currently attempting to accelerate foreclosures on properties with some positive equity, where households have fallen behind their mortgages repayments. If true, this will put added pressure on the market prices and increases, not reduces the costs of foreclosure for the mortgages that are truly unsustainable in the long run. Perversely, the current system for mortgages arrears resolution is incentivizing the bank to pursue short-term maximization of funds recovery at the expense of genuine long-term sustainability.


Given the extent of the Irish mortgages crisis, we have no easy and painless solutions to the problem of household debt overhang. The more efficient and sustainable long-term options require direct writedowns of household debts to reflect, at least in part, collapsed asset markets valuations of Irish property. Arguably, with the Irish Governments committing all resources aimed at restructuring the banking sector to writing down development and investment loans underlying the commercial real estate bust, we no longer have this option available to us.

In its absence, we need to prepare for a wave of bankruptcies that will have to take place to absorb the losses accumulated within the banking system. Doing so will require taking a longer-term view of the Mortgage Arrears Resolution Targets, and relaxing significantly the Guidelines on a Reasonable Standard of Living and Expenses to allow for accumulation of savings and provision of health cover as discussed above.

We also need to cut the insolvency period duration from the current 6+1-years formula that applies to mortgages down to 1+2-years formula similar to the one that is in place in the UK, but only for households in genuine financial distress. Strategic defaulters who subsequently enter bankruptcy proceedings should be subject to the tougher regime as currently outlined in the existent legislation.

To finance these measures, we need to secure long-term cheap funding for the banks that will allow them rebuild their balancesheets not in a matter of 12 months, as currently planned, but over the next 10-15 years. The latter should be the job for the Eurosystem and the Central Bank. 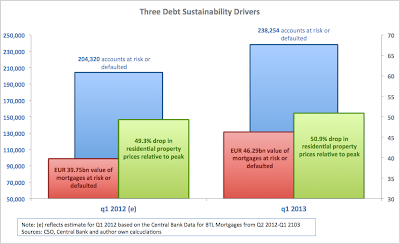 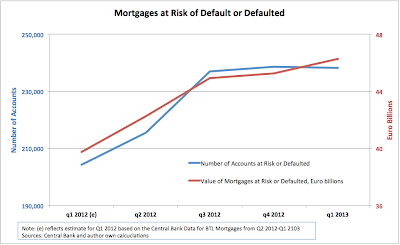 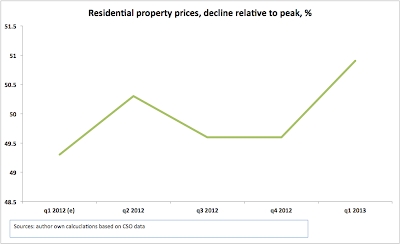 
This week, the Central Bank of Ireland published the data on the holdings of Irish Government long-term bonds for May 2013. Since May 2012, the amount of outstanding long-term dated Irish Government bonds rose by some EUR6.4 billion, once we control for the new bonds arising from the conversion of the IBRC Promissiory Notes in February 2013. EUR3.41 billion of this increase in supply of bonds was absorbed by the non-resident investors and institutions, while Irish Central Bank and monetary and financial institutions (aka Irish banks) have increased their holdings of long-dated Government bonds by EUR6.37 billion. All other investors, including financial intermediaries other than banks, non-financial corporations and households have reduced their holdings of   long-dated Government bonds by EUR3.37 billion. The data clearly shows that the degree of the inter-connectedness between the banks and the state, as measured by the Irish Government exposure to banks demand for its debt, did not decline since January 2012 through May 2013. Instead and in contrast to all official statements on the subject of the Sovereign-banks contagion risks, such risks today are only stronger than they were seventeen months ago.

Posted by TrueEconomics at 2:58 PM

I am curious myself about what mass sales of repossessed property ( i.e. distressed sales ) would have on any such senario. Values, market sentiment and bank lending would be destroyed I would imagine and any projections with them too I would think. Mass repossessions haven´t happened as of yet. I wonder if that `can´ can be kicked down the rod forever.

For me any property valuation before such a senario is as fanciful as valuations at the height of things in 2006-2008.