So Greece - off-the-charts in terms of not meeting its 'Programme' requirements has been fudged: 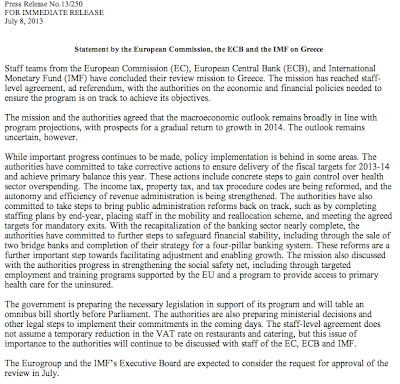 
Earlier this am I predicted that:

And per IMF release above, this is exactly what has happened - fudging complete... And what fudging!
While Troika says that outlook for the country remain uncertain, there has been a staff-level (technocrats) agreement on new 'reforms' on top of the old one on which Greece failed to deliver. And these new reforms - hold your breath - are more cuts in health spending, repeated promises to cut 12,500 public employees, and more tax reforms... The more things change...

Ah, is it just me or does anybody see
The new improved tomorrow isn't what it used to be
Yesterday keeps comin' 'round, it's just reality
It's the same damn song with a different melody
The market keeps on crashin' "...


Well, at least markets are not yet crashin' cause 'Greece really doesn't matter anymore' theory, right?..

The Eurogroup continued the endless parade of statements, comments and instructions today with this: http://www.eurozone.europa.eu/newsroom/news/2013/07/eurogroup-statement-on-greece/ which is largely the same drivel as already released by the Troika.

The Eurogroup also takes note that the economic outlook is largely unchanged from the previous review and is encouraged by the early signals pointing to a gradual return to growth in 2014.

I mean, ok, the logic is iron-clad: for months we've noticed that things are largely unchanged, but we've had rounds and rounds of changes made to T&Cs of the 'bailout' because things are largely unchanged. Still, our expectations never stopped changing... the recovery previously penciled in for 2012 has been moved to H2 2012, then H1 2013, then H2 2013 and now to H1 2014 or maybe H2 2014...

At the same time, significant further work is needed over the next weeks to fully implement all prior actions required for the next disbursement

Aha, now I understand - 'further work' is needed... except, wait a second, the 'further work' is the 'prior-agreed work' that... per above statement is a part of 'commitment to implement'... which Greece either has delivered (per commendation) or failed to deliver (per rather urgent 'need for further work')... so which one?..

Much of the rest in the statement is rather specific and make sone wonder - if Greece is being asked to do in the next two weeks what it has failed to do in last 12 months, why on earth is Greece deserving and commendations or, alternatively, how on earth can it be expected to deliver that?!

Never mind, all of it is pure fudge - Greece will not deliver 12,500 souls to the Purgatorio and it will not be able to tighten tax collection (something it failed to do over close to 50 years) in time for October 2104. And the Eurogroup is not expecting it to. Instead, there will be noise of compliance, sound of cash register emptying, followed by 3 months of calm and German elections.

To quote another musician:

So long, Marianne, it's time that we beganTo laugh and cry and cryAnd laugh about it all again
Laugh about it, folks... for following the Eurogroup statement, the IMF Chief, Christine Lagarde went out to face the public with a claim that, hold your breath, Euro area needs growth and ... deep gulp of air, please... jobs.

So long, Marianne, it's time that we began...
Posted by TrueEconomics at 9:55 AM