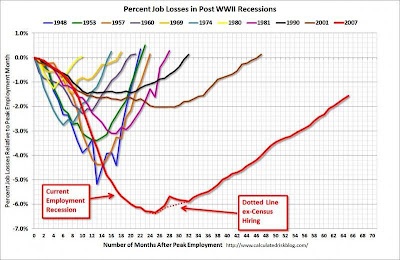 Basically, since 1981 recession, duration of the subsequent jobs losses has been longer and longer and longer. The duration spread has risen from 3 months between  1981 and 1990 recessions, to 14 months between 1990 and 2001 episodes to now 19 months and still counting. At current run rate, we are looking at 77-78 months duration and this will bring the spread to ca 33 months.

The important thing about this data set, is not to be scared about the fact that the spreads are enlarging as we go through one recession after another. It doesn't worry me in the slightest, to have 13-14% out of work - and that that figure would even be higher, had all the 20-something year old's gone off abroad for themselves (i.e. nothing to hold them down, and no reason to stick around).

But what are all these people doing during the 'good times', when they are supposedly 'in work'.

What scares the life out of me, is when in Ireland we have this yoke, that we describe as a 'recovery', where somehow, we try to find a way, to take that whole 25% in the un-employed, or under-employed column, and give them all 'fake' jobs. We look for the big hits, the big knock-outs, as a way to 'solve things'.

And it tends to favour political parties coming into office, who can drive up huge economic mega-bubbles, that are able to move the big 25% block of people from the minus, to the plus side.

What we ended up doing in the Celtic Tiger in Ireland, was just putting bodies sitting in seats, without even the right set of skills for what they are doing.

I saw it in particular myself in construction, where I had been trained in that professional area - and found myself vastly out-numbered by guys who had just done their Leaving Certs, and had come from MBA, and working in manufacturing and what not.

Construction 'stole' a labour force from wherever it could steal it from. Literally.

The fact that we try to force people in one massive lump of population, from one column to another one, regardless of where they might end up - or if the sectors they end up in, are at all suited for them, and their skill set being irrelevant in the Irish system - means, that nothing short really of a full scale, overheated, round-the-twist economic bubble is going to get the job done.

So each time, as these spreads on the graph get more and more extreme, it causes us to over-stretch ourselves, more and more each time, with desperation style over-heating measures to stimulate the economy back into to overdrive.

And for a few years, its great, and everyone gets taken care of. But at coffee breaks, we all stand around and count down the months until it all crashes again.

I know myself, in one of the companies in Ireland, which had €3 billion outstanding in debt, and countless numbers of billions tied up in land assets and various investment properties - that we had to have two separate work forces.

One work force, the Irish one sat in a large air conditioned office all day long, and drank coffee and watched the clock.

While we had a separate 'covert' little office on the other side of town, where we kept and managed a small team of Germans and Polish, who had all the training, had all the skills, and did 90% of the work.

And we purposefully kept them separated so one would not corrupt the other. And it was interesting too, when we experimented with bringing workers into the big office, that within about one year, the new arrivals and adapted to the status quo.

In another professional practice, they actually outsourced 'the work', to eastern Europe over fibre optics. And when the crash hit in 2008, they still had to let go 80 people in one go from the Irish headquarters. I've no idea what all the 80 people were actually doing by that time, because the guys in eastern Europe had been handed over nearly everything.

This basic 'system' of management of human resources was replicated in enterprise(s) all over Ireland. And there is a very real kind of story to be told here. This is the worrying part, that a lot of the human resources that we have exported out of Ireland since 2008, have only come from the kinds of systems that I described. This is the actual real 'price' that we pay at the end of the day, for having such things like low corporate taxation policy.

The view needs to get away more broader, altogether. We are just taking one generation after another, in Ireland, and basically destroying our potential workforce(s).

Above, in this sentence, "And it tends to favour political parties coming into office, who can drive up huge economic mega-bubbles, that are able to move the big 25% block of people from the minus, to the plus side".

I forgot to mention, and this brings Stephen Kinsella's higher research at University of Limerick into focus here - the relationship between skills, policies, state agencies, . . . and wait for it, yes, 'debt' in EU countries.

What happens here in Ireland, that as we need these crazy mega-bubbles, in order to 'move' that 25% block into high paying employment and prospects, that having inflated up our super bubbles - it has the diabolical effect of saddling all those 'on the way up', with this huge un-manageable mortgages and borrowings that they acquire as they make their journey upwards.

Which in turn, as enterprise and labour gets ruinously mis-managed and squandered - and the inevitable happens, where Ireland comes crashing down - then, you are coming crashing down, with this huge personal debt probably banging around in peoples' cargo section. The whole plane then, just doesn't glide along the surface of the water. It goes through the water, and the whole fuselage of the plane lodges firmly into the ocean bed.

So this is how we need to 'write off' whole entire generations of Irish citizens at a time, just because we tried to 'save' them in the first instance, by inflating the same mega-bubbles.

It is perhaps worth adding to the above, the following, . . .

The thing of course that was comprehensive and total about Ireland's last economic upswing, in terms of abuse to citizens in general, . . . and bearing in mind, that it happened very close on the back of a period of 10 years or more stagnation in the Irish economy during the very bleak 1980s years here, . . . is that everyday citizens of more senior years, who had managed to scrap together a little mortgage during the 1980s when property prices were floored, within a couple of years of exiting the same 'bleak 1980s' period, suddenly found themselves, for some reason ending up as Landlords - with that whole buy to rent, a second, third and maybe more properties.

These were people who had struggled only a few years earlier to 'dig out', a single mortgage for a modestly priced property during the bleak 80's. No body has properly studied this either, and why that happened to the extent that it did, and to the most unlikely of people too, who were old enough and experienced enough to know a lot better.

What this also says, is that entering into another upswing in the Irish economy, it will not be like the 1980s, 1990s transition, where people went from very small amounts of debt overhang, to suddenly having massive debt overhang. Because we already know, that 'middle class' conversation in Ireland at the moment, is reported in the media, as being about people who are working 'every hour that God sends', while still having 'zero', at the end of each and every week now.

I.e. The debt will never be paid off. So it means that as we enter into the next upswing in the Irish economy, that this will not provide the 'dry tinder', that there was around after the 1980s, . . . where most people burned up their 1980s legacy debt overhang in a relatively brief period, and were 'in the black'.

Don't expect to see very many 'in the black', as we enter the next upswing in the economy, . . . and that has a lot of good points in its favour too, if we look at what happened to mature, responsible solvent people as a results of Ireland's last credit boom.