BlackRock Investment Institute Economic Cycle survey for North America and Western Europe is out and here are core results (emphasis is mine):

"This month’s North America and Western Europe Economic Cycle Survey presented a positive outlook on global growth, with a net of 65% of 113 economists expecting the global economy will get stronger over the next year. (6% lower than within the September report).

At the 12 month horizon, the positive theme continued with the consensus expecting all economies spanned by the survey to strengthen or remain the same except Sweden.

The consensus outlook for the Eurozone was also strong, with 87% of economists expecting the currency-bloc to move to an expansionary phase over next six months. The picture within the bloc was not uniform however, with most respondents expecting only Greece to remain in a recessionary phase and an even mix of economists expecting Portugal and Belgium to be in an expansionary or recessionary phase at the 6 month horizon (and similarly so for Sweden, outside of the currency-bloc).
With regards to North America, the consensus view was firmly that the USA and Canada are in mid-cycle expansion and are expected to remain so through H2 2013."

Note that this correlates well with my own outlook: http://trueeconomics.blogspot.ie/2013/10/9102014-businessinsider-most-important.html

Also note: the above views do not reflect BlackRock own views or advice. 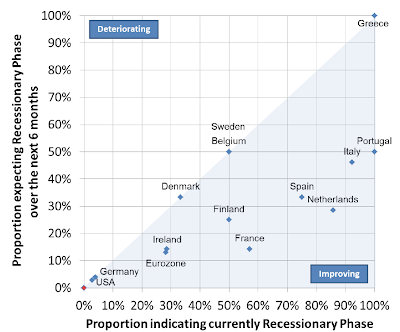 Note that in the chart above, Ireland now firmly converged with the Euro area. This is a very strong move compared to September survey: http://trueeconomics.blogspot.ie/2013/09/1292013-blackrock-institute-survey-n.html And the above is confirmed by the overall comparative expectations forward: 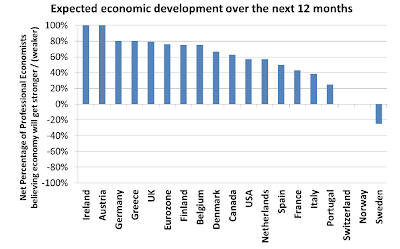 So on the net - good result for Ireland and positive outlook for Euro area as a whole.
Posted by TrueEconomics at 8:40 PM