CESIfo issued an update to its Q3-Q4 2013 forecasts for the euro area today.

"After six consecutive quarters of decline, GDP in the Eurozone increased by 0.3% in Q2 2013. Economic activity is projected to expand further over the forecast horizon (+0.1% in Q3, +0.3% in Q4 2013 and +0.4% in Q1 2014) mainly on the back of the expected pick-up in external demand as well as fiscal policy gradually becoming less contractionary."

"However, the recovery is likely to be very modest, as fiscal austerity measures and structural reforms currently undertaken by member states will continue to hamper the expansion of domestic demand."

Specifically:
-- "The unfavourable labour market conditions will keep on weighing on the development of real disposable income and private consumption will therefore recover only slowly."
-- "Aggregate investment is forecast to expand, albeit still at a rather low rate over the forecast horizon. This profile will be mainly driven by the increasing needs to replace depreciated capital as well as the robust foreign-demand growth."
-- "Under the assumptions that the oil price stabilizes at USD 111 per barrel and that the euro/dollar exchange rate fluctuates around 1.35, inflation is expected to remain well below 2% (1.5% in Q4 2013 and 1.4% in Q1 2014)."
-- "The major downside risks to this scenario arise from possible renewed escalations of the debt crisis and from a stronger than expected deceleration in some emerging markets." 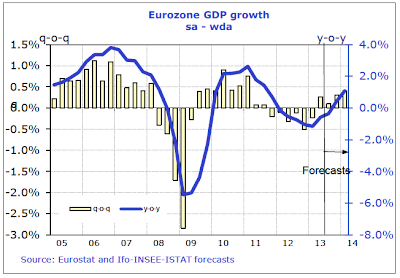 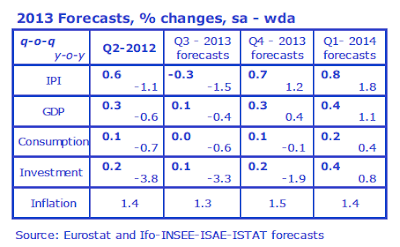 Note: my work on positive euro area growth signals based on CESIfo data will be featuring in monthly economics slide deck on Business Insider - stay tuned. Meanwhile, two previous post covering advanced pre-conditions for the above forecasts:
http://trueeconomics.blogspot.ie/2013/10/4102013-eurocoin-cautious-return-of.html (note eurocoin-consisted forecast for Q3 2013 set by me at 0.1% which is in line with CESIfo forecast above).

Posted by TrueEconomics at 5:51 PM