Markit and Investec released Services PMI survey press release for Ireland. As usual - the note is full of statements that can not be confirmed by information contained in the note itself.

On the side that can be reported/interpreted: 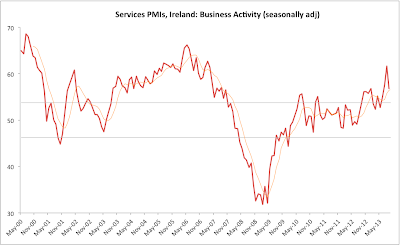 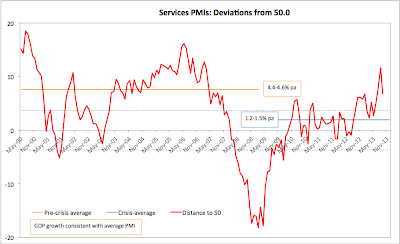 Overall: good numbers. However, we have no tangible information as to the movements on profit margins, employment, export orders, new orders etc. You should read this note on some caution regarding interpreting PMI for Services for Ireland: http://trueeconomics.blogspot.ie/2013/09/592013-cautionary-note-on-irish.html. Combined analysis of Manufacturing and Services PMIs to follow shortly.

Note: To add to this, I have now been seemingly removed from the mailing list for the slightly more detailed version of release (or Investec stopped supplying one altogether).
Posted by TrueEconomics at 8:52 AM