In the previous posts I covered separately both Service PMI for Ireland and Manufacturing PMI (released by Markit & Investec). As noted, both series show strong performance in September. Here is the combined analysis:

Services PMI have broken out of the flat trend and are now trending up for the last 12 months. However, Manufacturing PMI continues to move side-ways, although on average remaining positive. 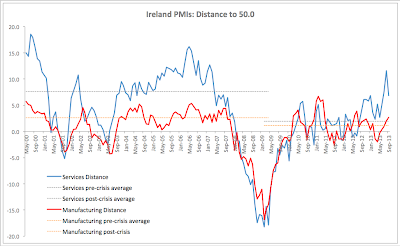 Two major points: September 2013 reading puts both indices at statistically significant levels above 50.0, which is the first such occurrence since February 2011: 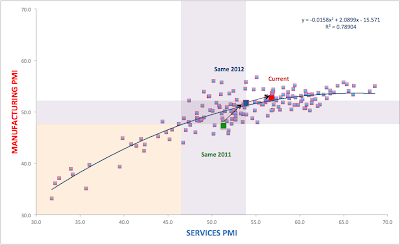 In addition, we are seeing stronger positive correlation between the two indices (the 12mo rolling correlation below is only indicative) established since February 2013 low: 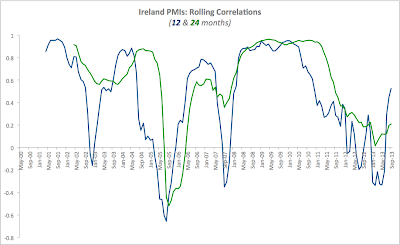 In other words, both sides of the economy are now performing better, but we need this momentum to be sustained over 2-3 months to see serious feed-through into actual economic activity figures.
Posted by TrueEconomics at 9:13 AM