EU Commission published some interesting research into Tax Reforms across the EU. The paper is available here: http://ec.europa.eu/economy_finance/publications/european_economy/2013/pdf/ee5_en.pdf

One interesting topic covered relates to the substitution away from equity in favour of debt funding in corporate capital investment. A chart to start with: 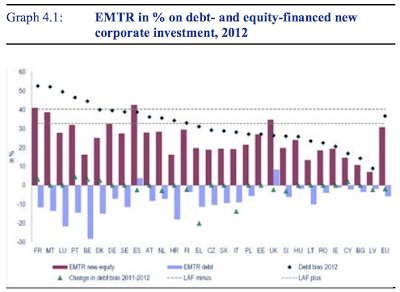 Now, per above, the disincentives to equity investment and incentives in favour of debt seem to be the lowest (in euro area) in Cyprus and Ireland. Note that these countries are associated with aggressive brass-plating (Luxembourg) are distinct from countries with aggressive tax arbitrage activities (Cyprus and Ireland). And thus, behold the skew in the EU Commission analysis: MNCs investing into these countries do not use debt on-shoring (US MNCs do not borrow in these countries), but use registry of equity there (for example, in Irish case - due to FDI-booked investments, or equity investment by IFSC companies, ditto for old Cypriot banking system vis Russian corporates).

The EU admits almost as much:
"There is also evidence that the tax advantage of debt fuels international profit-shifting activities as
rules on interest deductibility differ between countries and there are mismatches in decisions on which instruments are considered debt financing. Several studies analyse the debt financing of multinationals with either parent companies or subsidiaries in the United States, Germany, Canada and the EU. The results of these studies suggest that firms use intra-group loans to adapt their financial structure and minimise their overall tax burden. By shifting debt to an affiliate located in a high-tax country, corporate groups are able to deduct interest payments against a higher statutory tax rate while the interest received by the lending affiliate is taxed at a lower rate. Taking data from 32 European countries between 1994 and 2003, Huizinga et al. (2008) find that a 10 % increase in the tax rate increases leverage by 1.8 %. The authors also show evidence of debt-shifting as, for multinationals with two equal-size establishments in two countries, a 10 % increase in the tax rate in one country leads to an increase in leverage of the company located in that country by 2.4 % and a decrease in leverage in the affiliated foreign company by 0.6 %."

Posted by TrueEconomics at 3:11 PM