While the euro leaders are happily slipping into dream-like state of amnesia, engaging in esoteric discussions and debates about the US spying scandals, wasting summit time on chatter and fluffing of feathers, the region's trials are not going away.

Debt overhangs remain persistent in the public, non-financial corporate and households domains; incomes remain stagnant and declining in real terms; unemployment is sky-high; deficits are sky-high; lending is stuck in 'reverse' gear; depositors are getting taken for a ride by the banking system malfunctions; and so on... Aggregate levels of uncertainty/risk in the system are not abating back to the levels of pre-crisis bliss, no matter how much intensive Positiviagra, Hopium and Confidozac have been pumped into the airways... 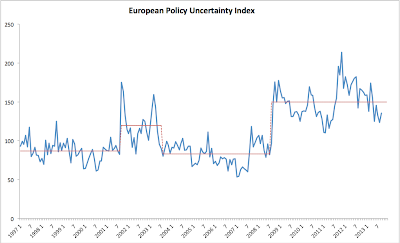 Posted by TrueEconomics at 8:51 PM