IMF recently warned about growing own-sovereign exposures of European banks when it comes to government bonds holdings. FT echoed with an article: http://www.ft.com/intl/cms/s/0/9b6fb558-3270-11e3-b3a7-00144feab7de.html


"By far the majority of the increases – which occurred steadily month-on-month – are in holdings of bonds issued by banks’ own governments." So overall, "Government bonds, as a percentage of total eurozone bank assets, have grown to 5.6 per cent from 4.3 per cent since the beginning of 2012."

Lest we forget, there is a strong momentum building up in Europe to do something about the problem of European banks over-reliance on sovereign bonds - a momentum driven by lower debt countries with significant exposures to Target 2 imbalances. At the end of September, ECB's Governing Council Member Jen Weidmeann said that "The time is ripe to address the regulatory treatment of sovereign exposures," Weidmann wrote in an opinion piece published on the website of the Financial Times. "Without it, I see no reliable way of breaking the sovereign-banking nexus." (see here: http://www.efxnews.com/story/20978/ecb-weidmann-time-end-preferential-treatment-gov-debt?utm_content=bufferffb97&utm_source=buffer&utm_medium=twitter&utm_campaign=Buffer)

Basically, removing automatic zero risk weighting on sovereign bonds, especially for the weaker peripheral sovereigns will be a major problem for the European banks and can precipitate a strong sell-off of the sovereign bonds. I suspect it will be unlikely to take place in the current environment. But gradual shift toward such an approach can easily take place.

Another recent article highlighted the shift away from foreign lending by European banks on foot of the growing sovereign debt exposures: http://www.voxeu.org/article/impact-sovereign-debt-exposure-bank-lending-evidence-european-debt-crisis

Based on Forbes data,


Two charts highlighting the plight of Spanish and Italian banks in terms of their sovereign bonds exposures (first) and the levels of LTROs exposures: 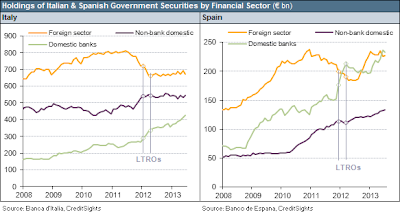 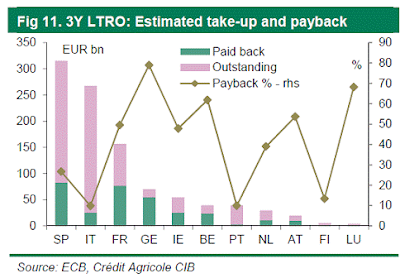 Posted by TrueEconomics at 9:07 AM