This is an unedited version of my Sunday Times column from October 6, 2013.


Newton’s Third Law of Motion postulates that to every action, there is always an equal and opposite reaction. Alas, as recent economic history suggests, physics laws do not apply to economics.

The events of September are case in point. In recent weeks, economic data from the euro area and Ireland have been signaling some improvement in growth conditions. Physics would suggest that the reaction should be to use this time to put forward new systems that can help us averting or mitigating the next crises and deal with the current one. Political economy, in contrast, tells us that any improvement is just a signal to policymakers to slip back into the comfort of status quo.

Meanwhile, the core problems of the Financial Crisis and the Great Recession remain unaddressed, and risks in the global financial markets, are rising, not falling.

More ominously, the Euro area, and by corollary Ireland, are now once again in the line of fire. The reason for this is that for all the talk about drastic changes in the way the financial services operate and are regulated, Europe has done virtually nothing to effectively address the lessons learned since September 2008.


Last month we marked the fifth anniversaries of the Lehman Brothers’ bankruptcy and the introduction of the Irish banking guarantee. These events define the breaking points of the global financial crisis. In the same month we also saw the restart of the Greek debt negotiations ahead of the Third Bailout, the Portuguese Government announcement that its debt will reach 128 percent of the country GDP by the end of this year, a renewed political crisis in Italy, and continued catastrophic decline in the Cypriot economy. Public debt levels across the entire euro periphery are still rising; economies continue to shrink or stagnate. Financial system remains dysfunctional and loaded with risks. Voters are growing weary of this mess. In Spain, political divisions and separatist movements gained strength, while German and Austrian elections have signaled a prospect of the governments’ paralysis.

In Ireland, the poster boy for EU policies, pressures continued to build up in the banking system. The Central Bank is barely containing its dissatisfaction with the lack of progress achieved by the banks in dealing with arrears and is forcefully pushing through new, ever more ambitious, mortgages resolutions targets. Yet it is not empowered to enforce these targets and has no capacity to steer the banks in the direction of safeguarding consumer interests. Business loans continue to meltdown hidden in the accounts.

Meanwhile, the latest set of data from the banking sector is highlighting the fact that little has changed on the ground in five years of the crisis. Domestic deposits are flat or declining – depending on which part of the system one looks at. Foreign deposits are falling. Credit supply continues to shrink.


Perhaps the greatest problem faced by the euro area and Ireland is that since the late 2008, tens of thousands of pages of new regulations have been drawn up in attempting to cover up the collapse of the banking system. Well in excess of EUR 700 billion was spent on ‘repairing’ the banks. And yet, few tangible changes on the ground have taken place. The lessons of the crisis have not been learned and its legacy continues to persist.

There are three basic problems with euro area financial systems as they stand today - the very same problems that plagued the system since the start of the crisis. These are: high leverage and systemic risks, excessive concentration of the banks by size, and wrong-headed regulatory responses to the crisis.

New York University’s Volatility Lab maintains a current database on systemic risks present in the global banking sector. Top 50, ranked by the degree of leverage carried on their balance sheet, euro area banks had combined exposure to USD 1.376 trillion in systemic risks at the end of last week. The banks market value was half of that at USD668 billion. Average leverage in the euro area top 50 banks is 58.5 or almost double Lehman's, when measured as a function of own equity. Two flagship Irish banks, still rated internationally, Bank of Ireland and Ptsb, are ranked 37th and 46th in terms of overall leverage risks and carry combined systemic risk of USD11.4 billion. Accounting for the banks provisions for bad loans, the two would rank in top 20 most risky banks in the advanced world.

Compare this to the US banking system. The highest level of leverage recorded for any American bank is 20.4 times (to equity). Total systemic risk of the top 50 leveraged financial institutions in the entire Americas (North and South) is around USD489 billion, set against the market value of these institutions of USD1.4 trillion.

Since September 2008, systemic risk in the US banking system has more than halved. In the case of euro area, the decline is only one-fifth.

Euro area banks positions as too-big-to-fail are becoming even stronger as the result of the crisis. In the peripheral euro states, and especially in Ireland, this effect is magnified by the deliberate policies attempting to shore up their banking systems by further concentrating market power of ‘Pillar’ banks.


Another area in which change has been scarce is the regulations concerning the funding of the banks. The crisis was driven, in part, by the short-term nature of banks funding – the main cause for the issuance of the September 2008 banking guarantee in Ireland.

In the wake of the crisis, one would naturally expect the new regulatory changes to focus on increasing the deposits share in funding and on reducing banks’ reliance on and costly (in the case of restructuring) senior bonds. None of this has happened to-date and following Cypriot haircuts on depositors one can argue that the ability of euro area banks to raise funding via deposits has now been reduced, not increased.

In addition to driving consolidation of the sector, Europe’s political leaders promised to raise the capital requirements on the banks. Actions did not match their rhetoric. Higher capital holdings are not being put in place fast enough. The EU is actively attempting to delay global efforts at introduction of new minimum standards for capital. As the result, current levels of capital buffers held by the top 50 euro area banks are below those held by Lehman Brothers at the end of 2008. Irish banks capital levels, even after massive injections of 2011, are also lower than that of Lehman’s once the expected losses are accounted for.


Even more ominously, the ideology of harmonisation as a solution to every problem still dominates the EU thinking. This ideology directly contradicts core principles of risk management. By reducing diversity of the regulatory and supervisory systems, the EU is making a bet that its approach to regulation is the best that can ever be developed. History of the entire European Monetary Union existence tells us that this is unlikely to be the case.

Currently, there are only two proposals as to how this demand for rescue funds can be addressed. You guessed it – both are utterly unrealistic when it comes to political economy’s reality.

The first one is promising to deliver a small rescue fund for future banks rescues capitalized out of a special banks levy. The fund is not going to be operative for at least ten years from its formation and will not be able to deal with the current crisis legacy debts.

The second plan was summarized this week in the IMF policy paper. Per IMF, full fiscal harmonisation is a necessary condition for existence of the common currency. A full fiscal union, and by corollary a political union as well, is required to absorb potential shocks from the future crises. The union should cover better oversight by the EU authorities over national budgets and fiscal policies, a centralised budget, borrowing and taxing authority, and a credible and independent fund for backstopping shocks to the banking sector. In more simple terms, the IMF is outlining a federal government for Europe, minus democratic controls and elections.

Under all of these plans, there is no promise of relief for Ireland on crisis-related banking debts. In fact, the IMF proposals clearly and explicitly state that the stand-alone fund will only be available to deal with future crises. Addressing legacy costs will require separate mutualisation of the Government liabilities relating to the banking sector rescues. The IMF proposal, in the case of Ireland, means accepting tax harmonisation and surrendering some of the Irish tax revenues to the federal authorities.


At this stage, it is painfully clear to any objective observer that fundamental drivers of the Financial Crisis triggered by the events of September 2008 remain unaddressed in the case of European banking. Thus, core risks contained in the financial system in Europe and in Ireland in particular are now rising once again. Politics have been trumping logic over the last five years just as they did in the years building up to the crisis. This is not a good prescription for the future. 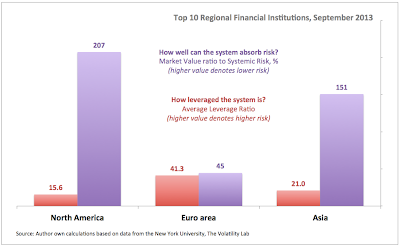 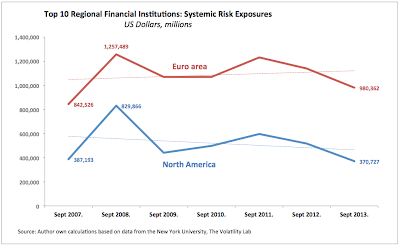 A study by the Bank for International Settlements researchers, Stephen Cecchetti and Enisse Kharroubi, published this week, attempted to uncover the reasons for the negative relationship between the rate of growth in financial services and the rate of growth in innovation-related productivity. In other words, the study looked at what is known in economics as total factor productivity growth – growth in productivity attributable to skills, technology, as well as other 'softer' sources, such as, for example, entrepreneurship or changes in corporate strategies, etc. The authors found that an increase in financial sector activity leads to outflow of skilled workers away from entrepreneurial ventures and toward financial sector. This, in turn, results in the financial sector growth crowding out growth in R&D-intensive firms and industries. The study used data for 15 OECD countries, including some countries with open economies and significant shares of financial sector in GDP, similar to Ireland. The findings are striking: R&D intensive sectors located in a country whose financial system is growing rapidly grow between 1.9 and 2.9% a year slower low R&D intensity sectors located in a country whose financial system is growing slowly. This huge effect implies that for the economies like Ireland, shifting economic development to R&D-intensive activity will require significant efforts to mitigate the effects of the IFSC on draining the indigenous skills pool. It also implies that Ireland should consider running an entirely separate system for attracting skilled immigrants for specific sectors.

Posted by TrueEconomics at 11:17 PM