As you know, I prefer not to blog extensively on economics matters over the weekend. However, due to work time constraints this week, I have accumulated lots of interesting material that requires some catch up blogging... so here are some new posts on economics matters...

First up: an interesting chart summarising neatly the problem of Irish fiscal consolidations to-date and the reasons why we are not out of the woods yet. 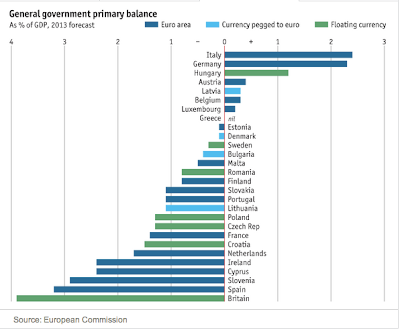 The above plots structural deficits in the EU (in other words the deficits that would have prevailed if the economy was not in a cyclical recession or downturn), as estimated by the EU Commission. Less questionable are those deficits derived using the IMF methodology: 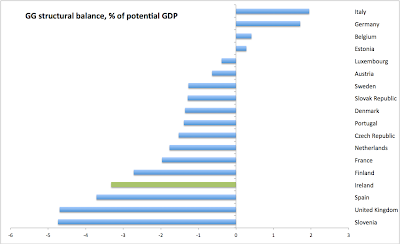 According to IMF estimates, Ireland's structural deficits are the fourth largest in the EU and are second highest amongst the 'peripheral' states.

For comparative, consider also the primary deficits (removing the cost of interest on government debt): 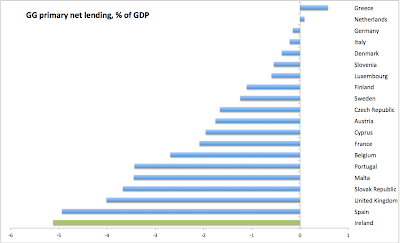 Ireland is the worst performer in 2013 in the EU (this might improve to the second worst given reclassification of EUR700 million in licenses sales from 2012 into 2013). Notice that Greece is already running primary surplus, while Italy is close to doing so.

The above clearly shows that the Exchequer in Ireland is far from achieving sustainable deficits trajectory and that any claims that Ireland is close to completing fiscal adjustment required to restore its public finances to health should be subject to serious reservations.
Posted by TrueEconomics at 5:29 PM