The Euromoney Country Risk survey results are out for Q3 2013 and here is some analysis with a comment from yours truly. As usual, emphasis is mine:

"Some 101 of the 186 countries surveyed have succumbed to lower ECR scores (increased risk) since June, which, with 17 unchanged, leaves just 68 safer, according to the views of global economists and other country-risk experts surveyed during the third quarter."


"... the shake-out that occurred in the wake of the collapse of Lehman Brothers in September 2008 has still left the majority of sovereigns – some 75% in all – with vastly increased risk levels than before the crisis; in the case of the eurozone periphery - Cyprus, Greece, Ireland, Italy, Portugal and Spain – an astonishing 25 to 50 points each." 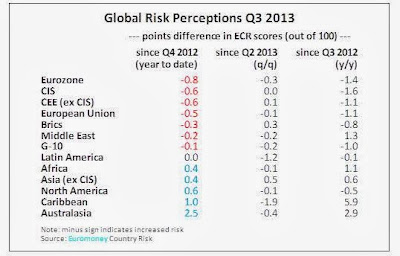 Notice that in the above, Euro area shows the highest rate of deterioration of any region, save the CIS, and CIS deterioration is in part driven by links to the Euro area.

Per ECR: "US causing fewer flutters for G10 risk profile than Europe’s problems."

"Within the G10 group of leading industrialized nations, the US is not considered a particularly riskier prospect in spite of its latest political troubles. The world’s biggest economy has slipped to 17th in the rankings, but its score is still higher than at the start of the year."

In the case of Europe, core downward pressure drivers are: 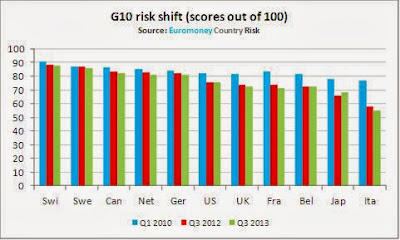 Per ECR: "Indeed, greater concerns are reserved for 21st-placed France, with its fiscal targets missed and the economy remaining sluggish, as well as for Aaa-rated Sweden, in fifth spot, where a moribund economy and a government relaxing fiscal policy with tax cuts ahead of next year’s parliamentary election are gnawing away at the sovereign’s gold-plated creditworthiness."

"Both countries have seen their scores slip the most (by 0.7 points each since June), within a group where Germany is flat-lining as it awaits the formation of a new government..."

"In the European Union, 17 of its now 28 member states are riskier, whether compared with June or since the end of last year..."

"Remarkably, in spite of the recoveries witnessed in some of the bailout countries, notably Ireland and Portugal, the eurozone crisis is continuing to cause ripples, with no fewer than 10 of the 17 member states still succumbing to lower scores during Q3. This comes amid weak economies, excessively high unemployment rates, spikes in political risk, trade-weighted appreciation of the euro, and Greek borrowing concerns re-emerging to keep the region’s worst performer grounded on 34 points." 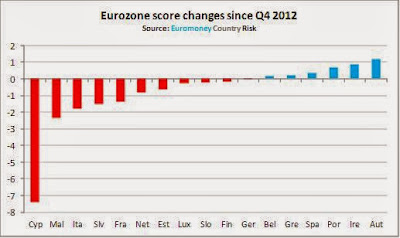 "Constantin Gurdgiev, another ECR contributor, based in Dublin, says: “The changes in risk assessments broadly reflect improved sentiment across the euro area, consistent with both improved global growth outlook and internal regional stabilization in the wake of protracted sovereign debt and growth crises.

“[However] structural weaknesses and risks remain, with France presenting significant long-term risk due to the complete absence of serious efforts to reform the labour markets and address a chronic lack of investment in new enterprises formation.

“The US debt-ceiling uncertainty also presents a lower risk to the euro area economies than the longer-term upward pressure on US yields. As benchmark yields for the US and Germany deteriorate into 2014, there will be renewed pressure on funding excessive debt levels across the majority of the euro area economies, most notably for Greece, Italy, Portugal, Spain and Ireland, but also for Belgium and the Netherlands.”"

Posted by TrueEconomics at 9:12 PM