This is an unedited version of my Sunday Times column from September 22, 2013.


The upcoming Budget 2014 will be one of the toughest since the beginning of the crisis in terms of the overall levels of cuts and tax increases. It also promises to cut across the psychological barrier of austerity fatigue. The latter aspect of Budget 2014 is more pernicious. Two other factors will add to the national distress, comes October 15th. Reinforcing our national sense of exhaustion with endless austerity, this week, the IMF published a staff research paper on fiscal adjustments undertaken during the current Great Recession. According to some, the IMF study reinforces the argument that Ireland should have been allowed to spread the austerity over a longer period time. In addition to this, Ireland’s planned 2014 cuts are set to be well in excess of the deficit reduction targets for any other euro area country.

The superficial reading of the IMF statement, the nascent sense of social distress brewing underneath the surface of public calm, and the tangible and very real pain felt by many in the society suggest that the Government should take it easier in 2014-2015. The policy option, consistent with such a choice would be to cut less than committed to under the multi-annual fiscal plans agreed with the Troika. This is being proposed by a number of senior Ministers and TDs, the Opposition and the Unions.

Alas, Ministers Noonan and Howlin have little choice when it comes to the actual volumes of fiscal adjustments they will have to implement next year. Like it or not, we will need to stick very close to the EUR3.1 billion deficit reduction targets irrespective of the IMF working papers conclusions, or the volume of outcries coming from the Government backbenchers and the opposition ranks.

Here's how the brutal logic of our budgetary position stacks up against an idea of easing on deficit reductions.

If everything goes according to the plan, Ireland will end 2013 with a second or a third highest deficit in the EU, depending on how we account for the one-off spending measures across the peripheral states. We will also have the second highest primary deficit (that is deficit excluding cost of interest payments on Government debt) in the euro area. In 2014 this abysmal performance will replay once again, assuming we meet the targets. Greece and Italy are set to finish 2013 with a primary surplus. Portugal is expected to post a primary deficit of less than one half that of Ireland's. Should Ireland deliver on the targets for 2014, our gap between the Government revenues and spending will still stand at around 4.3-4.6 percent of GDP at the end of December 2014. Not a great position to be in, especially for a country that claims to be different from the rest of the euro periphery.

In this environment, talking about any change in the course on austerity or attempting to enact a fiscal stimulus will be equivalent to accelerating into a blind corner on a one-lane road.

In order to stabilise government debt, Ireland will require cumulative deficits cuts of 11.6% of GDP between January 2013 and December 2018 with quarter of these cuts scheduled for 2014-2015. This is the largest volume of cuts for any economy in the euro area - more than 20 percent greater than the one to be undertaken by Greece and more than 50 percent in excess of Spain’s requirement.

Any delay in cuts today will only multiply pain tomorrow with higher debt to deflate in 2016-2018. As things stand under the agreed plans, Ireland will be spending 4.9 percent of its GDP annually on funding debt interest payments from through 2018. This is more than one and a half times greater than what we will be allocating to gross public investment. The interest bill, over the next five years, will be at least EUR46 billion. Lowering 2014 adjustment target by EUR1 billion can result in the above cost rising to over EUR50 billion, based on my estimates using the IMF forecast models.

The reason for this is that any departure from the committed fiscal adjustment path is likely to have consequences.

Firstly, with the ongoing sell-offs of bonds in the global investment markets, it is highly likely that the cost of funding Government debt for Ireland will rise over the medium term even absent any delays in fiscal adjustments. The long-term interest rates are already showing sharper rising of yields on longer maturity bonds compared to short-dated bonds. Year to date, German 10-year yields are up 64 basis points, UK are up 105 bps and the US ones are up 111 bps. The effects of these changes on Irish debt and deficit dynamics are not yet fully priced in the latest IMF forecasts. A mild steepening of the maturity curve for Ireland can significantly increase our interest bill. This risk becomes even more pronounced if we are to delay the Troika programme.

Secondly, failure to fulfill our commitments is unlikely to help us in our transition from Troika funding. Ireland will require a precautionary standby arrangement of at least EUR10 billion in cheaply priced funds. The European Stability Mechanism (ESM) funds to cover this come on foot of good will of our EU 'partners'. These partners, in turn, are seeking to redraft EU tax policies, as well as banking, financial and ICT services regulations. In virtually all of these proposals, Ireland is at odds with the European consensus. Good will of Paris and Berlin is a hard commodity, requiring hard currency of appeasement. Whether we like it or not, by stepping into the euro system, we committed ourselves to this position.

The long run financial arithmetic also presents a major problem for those who misread the latest IMF research on austerity as a sign that the Fund is advocating easing of the 2014-2015 adjustments for Ireland. The IMF clearly shows that Ireland has already delayed required fiscal cuts more than any other euro area economy. In all euro area peripheral economies, other than Ireland, fiscal adjustments for 2014-2015 are set at less than one fifth of the total adjustment required for 2010-2015 period. In Ireland they are set at one third. Which means that, having taken more medicine upfront, Italy, Greece, Portugal and Iceland can now afford to ease on cutting future primary imbalances.


With this in mind, there is not a snowballs chance in hell that we can substantively deviate from the plan to cut EUR3.1 billion, gross, from 2014 deficit without facing steep bill for doing so. Which leaves us with the only pertinent question to be asked: how such an adjustment should be spread across three areas of fiscal policy: Government revenues, current expenditure and capital expenditure.

This year, through August, Government finances have been running ahead of both 2012 levels and we are perfuming well relative to what was planned in the budget 2013 profile. However, the headline numbers conceal some worrying sub-currents.

This year's current primary expenditure in 8 months through August stood at over EUR36.6 billion, more than targeted in the 2013 profile and ahead on the same period last year. This deterioration was caused by the one off payment made on winding down the IBRC, plus the increase in contributions to the EU budget. Nonetheless, while tax and Government revenues increases in the 8 moths of 2013 were running at almost EUR3.4 billion compared to the same period of 2012, spending reductions are down only EUR823 million.

To-date, only 17 percent of the entire annual adjustment came via current voted spending cuts and over 57 percent came from increases in Government revenues. The balance of savings was achieved by slashing further already decimated capital investment programmes.  Given the overall capital investment profile from 1994 through forecast 2013 levels, as provided by the Department of Public Expenditure and Reform, this year's net capital spending is likely to come below the amount required to cover amortisation and depreciation of the current stock of Government capital. Put simply, we are just about keeping the windows on our public buildings and doors on our public schools in working order.

In this environment, Labour Party and opposition calls for undoing 'the savage cuts to our frontline services' - or current spending side of the Government balance sheet - are about as good as Doctor Nick Rivera's cheerfully internecine surgical exploits in the Simpsons.

The adjustments to be taken over the next two years will have to fall heavily on current spending side. This is a very painful task. To-date, much of the savings achieved on the expenditure side involved either transforming public spending into private sector fees, which can be called a hidden form of taxation, or by achieving short term temporary savings.

The former is best exemplified by continued hikes of hospitals' charges which have all but decimated the markets for health insurance. The result is a simultaneous reduction in health insurance coverage, an increase in demand for public health services and costly emergency treatments. The 'savings' achieved are most likely costing us more than they bring in.

In short, the Government has no choice, but to largely follow the prescribed course of action. Like it or not, it also has no choice but to cut deeper into current spending. This is going to be an ugly budget by all measures possible, but the real cause of the pain it will inflict rests not with the Troika insistence on austerity. Instead, the real drivers for Ireland’s deep cuts in public spending are the internal imbalances in our public expenditure and the lack of deeper reforms in the earlier years of the crisis. 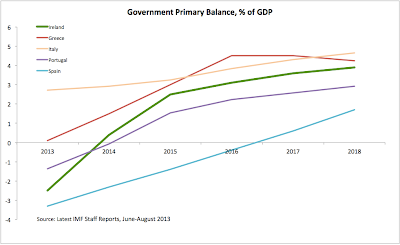 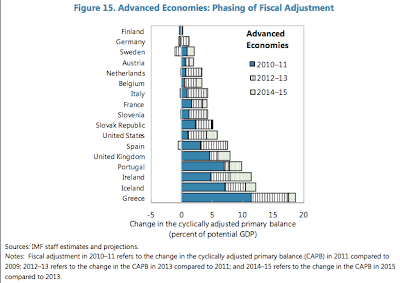 Recent data from the CSO on Irish goods exports painted a picture of significant gains in one indigenous economy sector: agri-food exports. The exports of Food and live animals increased by EUR101 million or 15 percent in July 2013, compared to July 2012. In seven months from January 2013, agri-food exports rose to EUR4,911 million, up 8.8 percent. Most of the increases related to exports of animals-related products, live animals, eggs and milk. The new data caused a small avalanche of press releases from various representative bodies extolling the virtues of agri-food sector in Ireland and posting claims that the sector is poised to drive Ireland out of the recession. Alas, the data on agricultural prices, also covering the period through July 2013, released just three days after the publication of exports statistics, poured some cold water over the hot coals of agri-food sector egos. From January through July 2013, the main driver for improved exports performance of our agriculture and food sectors was not some indigenous productivity growth or innovation, but the price inflation in the globally-set agricultural output prices. On an annual basis, the agricultural output prices rose 10.7 percent in July 2013. Over the same period of time, the agricultural input price index was up 5.2 percent in July 2013. This means that Irish exports uptick in 2013 to-date was built on the pain of consumers elsewhere. So good news is that our agri-food exports were up. Bad news is that we have preciously little, if anything, to do with causing this rise.

Posted by TrueEconomics at 7:51 AM