Here are some of the highlights of my analysis of the paper results:

When it comes to impact on bonds markets:

1) UMPs overall had zero statistical impact on bond yields in Ireland and Portugal, zero impact on Greece, except via a potential feed-through in commodities prices, moderate impact (reducing yields) for Italian Government bonds, and weak impact on Spanish yields.

2) There was significant statistically, but small overall adverse impact (increasing yields) for Germany and the Netherlands 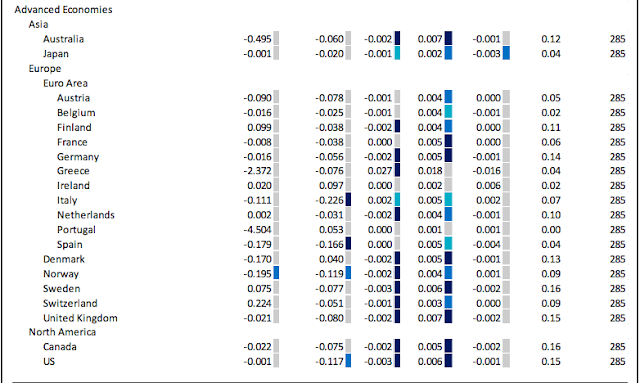 Note: key to all tables: 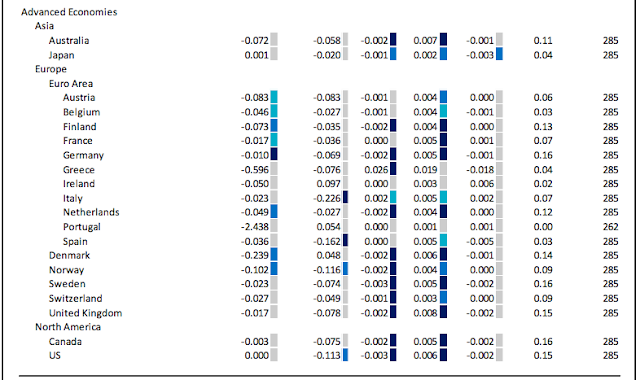 5) In the case of Ireland, ALL of the increases in bond flows were associated with the US Fed and Bank of England interventions, and NONE with the ECB interventions. In other words, ECB policies seemed to have been absolutely irrelevant to Irish bonds flows.

6) In the case of Ireland, ECB interventions resulted in outflows (negative impact) on Irish equity funds, while Fed and BofE policies resulted in net inflows.

7) All UMPs combined had a net positive impact on equity funds flows in the case of Ireland of 24.48% of GDP, for Greece of 2.15% of GDP, for Italy of 0.77% of GDP and for Spain of 2.33% of GDP. For Portugal there was net negative effect of -1.17% of GDP - one of two countries in the euro area (with Austria) where net equity funds flows were negative as the result of UMPs interventions.

Posted by TrueEconomics at 4:47 PM