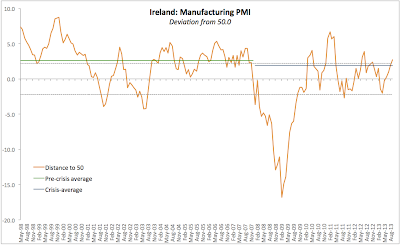 Now, it appears we have broken the downward trend at last. Index volatility (36mo rolling) has fallen slightly to around 2.3 in terms of 3mo average through September, which is close to historical average of 2.4 and is well below the crisis-period average of 3.4. Positive skew on change is at 3mo average of +0.75 (for deviations from 50.0) and this contrasts with a negative -0.34 skew for historical data and -0.25 skew for crisis period data. So let's call it a trend reversal for the short term: 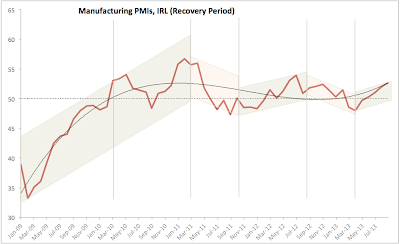 Sadly, nothing else to report, since Investec/Markit continue to push out data-less releases. Wish I could tell you about employment, exports orders, total orders... but there is not a single number in the press release, only comments.
Posted by TrueEconomics at 9:35 AM